The transcription factor serum response factor (SRF) plays a crucial role in the development of several organs. However, its role in the skin has not been explored. Here, we show that keratinocytes in normal human and mouse skin expressed high levels of SRF but that SRF expression was strongly downregulated in the hyperproliferative epidermis of wounded and psoriatic skin. Keratinocyte-specific deletion within the mouse SRF locus during embryonic development caused edema and skin blistering, and all animals died in utero. Postnatal loss of mouse SRF in keratinocytes resulted in the development of psoriasis-like skin lesions. These lesions were characterized by inflammation, hyperproliferation, and abnormal differentiation of keratinocytes as well as by disruption of the actin cytoskeleton. Ultrastructural analysis revealed markedly reduced cell-cell and cell-matrix contacts and loss of cell compaction in all epidermal layers. siRNA-mediated knockdown of SRF in primary human keratinocytes revealed that the cytoskeletal abnormalities and adhesion defects were a direct consequence of the loss of SRF. In contrast, the hyperproliferation observed in vivo was an indirect effect that was most likely a consequence of the inflammation. These results reveal that loss of SRF disrupts epidermal homeostasis and strongly suggest its involvement in the pathogenesis of hyperproliferative skin diseases, including psoriasis. 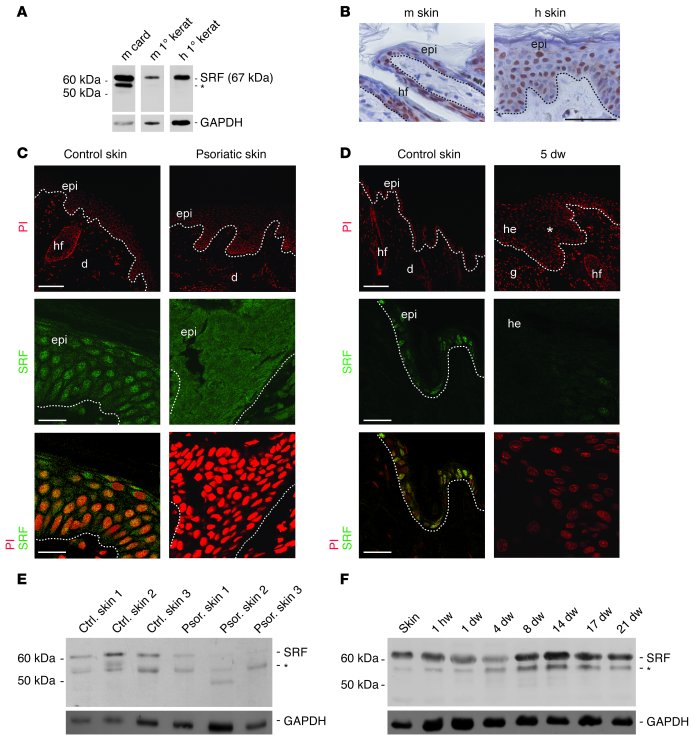