Toward unraveling the complexity of simple epithelial keratins in human disease

Toward unraveling the complexity of simple epithelial keratins in human disease

Simple epithelial keratins (SEKs) are found primarily in single-layered simple epithelia and include keratin 7 (K7), K8, K18–K20, and K23. Genetically engineered mice that lack SEKs or overexpress mutant SEKs have helped illuminate several keratin functions and served as important disease models. Insight into the contribution of SEKs to human disease has indicated that K8 and K18 are the major constituents of Mallory-Denk bodies, hepatic inclusions associated with several liver diseases, and are essential for inclusion formation. Furthermore, mutations in the genes encoding K8, K18, and K19 predispose individuals to a variety of liver diseases. Hence, as we discuss here, the SEK cytoskeleton is involved in the orchestration of several important cellular functions and contributes to the pathogenesis of human liver disease. 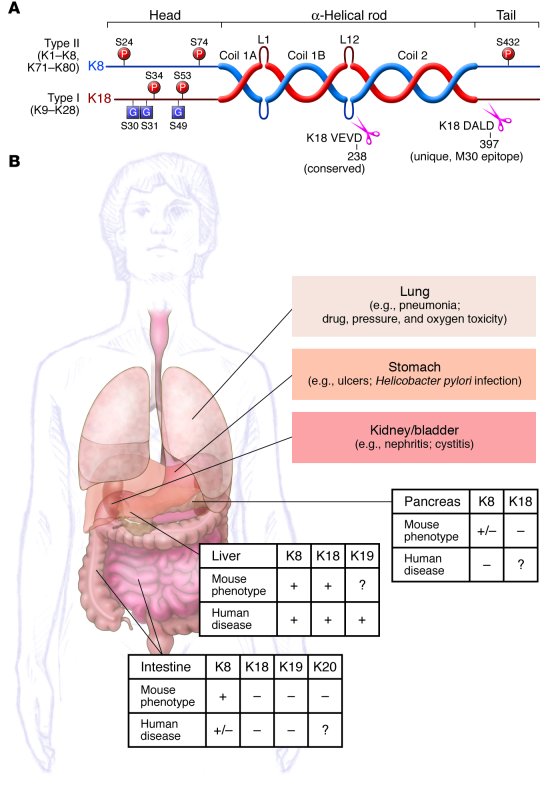 () Keratins form obligate heteropolymers (one type I and one type II keratin) and share a common structure that consists of a central coiled-coil α-helical rod domain that is flanked by non–α-helical head and tail domains. The head and tail domains are unique in that they include most of the sites for posttranslational modifications [phosphorylation (P) and glycosylation (G)]. The rod domain is subdivided into 3 subdomains (coils 1A, 1B, and 2) and by 2 linkers (L1 and L12). The L12 region includes a highly conserved caspase-digestion site (VEVD in K18) among type I keratins and other IFs, while only the K18 tail domain has a caspase cut site (DALD). The K18 VEVD and DALD (the M30 epitope) are recognized by epitope-specific antibodies (, , ). () Liver, pancreas, and intestine phenotypes caused by keratin mutations, as determined from findings in SEK-related animal models or in human patient studies. +, positive phenotype; –, absent phenotype; +/–, borderline phenotype; ?, untested and therefore unknown. Borderline phenotypes were assigned in the case of K8 mouse pancreas because pancreatitis develops after K8 overexpression, but at high gene copy numbers, and in the case of human intestine because K8/K18 variants are unlikely to be involved in predisposition to IBD. Also shown are some of the organs that we hypothesize may ultimately prove to be involved in additional SEK variant–associated human diseases, with a few potential candidates listed.