Bipolar disorder (BPD) is a devastating illness that is characterized by recurrent episodes of mania and depression. In addition to these cyclic episodes, individuals with BPD exhibit changes in psychovegetative function, cognitive performance, and general health and well being. In this article we draw from neuroimaging findings in humans, postmortem data, and human genetic and pharmacological studies as well as data from animal models of behavior to discuss the neurobiology of BPD. We conclude with a synthesis of where the field stands and with suggestions and strategies for future areas of study to further increase our conceptual understanding of this complex illness.

Overview of the PI and Wnt/GSK3 signaling pathways in the neuron. 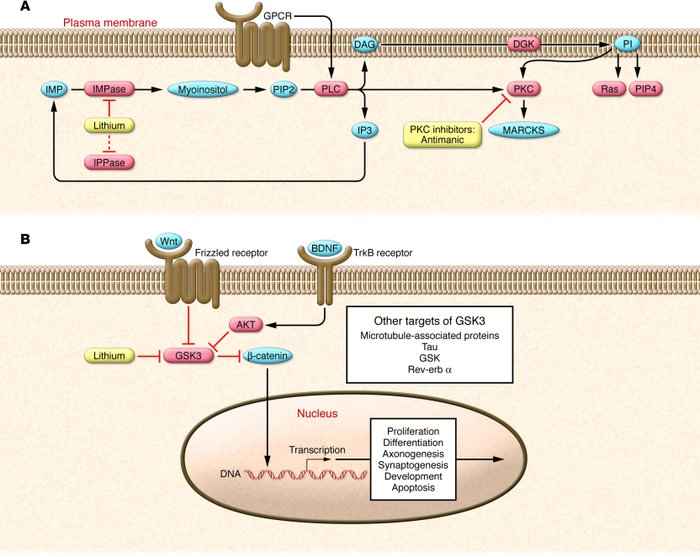 () Lithium directly inhibits key enzymes including IPPase and IMPase that regulate inositol-1,4,5-triphosphate (IP3) recycling. IMPase–mediated catalysis represents the final step in the conversion of inositol monophosphate (IMP) to myoinositol. Thus, inhibiting IMPase can reduce myoinositol levels. The inositol depletion hypothesis proposes that IMPase inhibition interferes with PI synthesis. The PI signaling cascade starts with surface receptor activation, shown here as GPCR-mediated activation of PLC. Activated PLC catalyzes the hydrolysis of PI biphosphate (PIP2) to diacylglycerol (DAG) and IP3. DAG activates PKC, which, among many other functions, activates myristoylated, alanine-rich C-kinase substrate (MARCKS). The antimanic drugs lithium and VPA both decrease levels of phosphorylated and total MARCKS. Molecules in red depict enzymes, while molecules in blue depict second messengers. PI signaling modulates other second messenger proteins including the small GTPase, Ras, and phosphatidylinositol-4-phosphate (PIP4). () Overview of the Wnt and GSK3 signaling pathways. Both lithium and Wnt signaling can inhibit GSK3. In the Wnt signaling pathway, Wnt glycoproteins interact with the frizzled family of receptors to stimulate the dishevelled-mediated (not shown) inactivation of GSK3. Inhibition of GSK3 prevents β-catenin phosphorylation, which inhibits its degradation and allows it to act as a transcription factor. Wnt proteins have been implicated in the regulation of neuron morphology, neurotransmission, and synaptogenesis. GSK3 is also inhibited by AKT (also known as PKB), which is activated downstream of the tropomyosin receptor B (TrkB), whose ligand is BDNF. In addition to inhibiting β-catenin, GSK3 has numerous other targets including microtubule-associated proteins, tau, GSK, and rev-erb α. Adapted with permission from ().