Fatty liver is commonly associated with alcohol ingestion and abuse. While the molecular pathogenesis of these fatty changes is well understood, the biochemical and pharmacological mechanisms by which ethanol stimulates these molecular changes remain unknown. During ethanol metabolism, adenosine is generated by the enzyme ecto-5′-nucleotidase, and adenosine production and adenosine receptor activation are known to play critical roles in the development of hepatic fibrosis. We therefore investigated whether adenosine and its receptors play a role in the development of alcohol-induced fatty liver. WT mice fed ethanol on the Lieber-DeCarli diet developed hepatic steatosis, including increased hepatic triglyceride content, while mice lacking ecto-5′-nucleotidase or adenosine A1 or A2B receptors were protected from developing fatty liver. Similar protection was also seen in WT mice treated with either an adenosine A1 or A2B receptor antagonist. Steatotic livers demonstrated increased expression of genes involved in fatty acid synthesis, which was prevented by blockade of adenosine A1 receptors, and decreased expression of genes involved in fatty acid metabolism, which was prevented by blockade of adenosine A2B receptors. In vitro studies supported roles for adenosine A1 receptors in promoting fatty acid synthesis and for A2B receptors in decreasing fatty acid metabolism. These results indicate that adenosine generated by ethanol metabolism plays an important role in ethanol-induced hepatic steatosis via both A1 and A2B receptors and suggest that targeting adenosine receptors may be effective in the prevention of alcohol-induced fatty liver.

Deletion of ecto-5′-nucleotidase prevents the development of ethanol-induced fatty liver in mice. 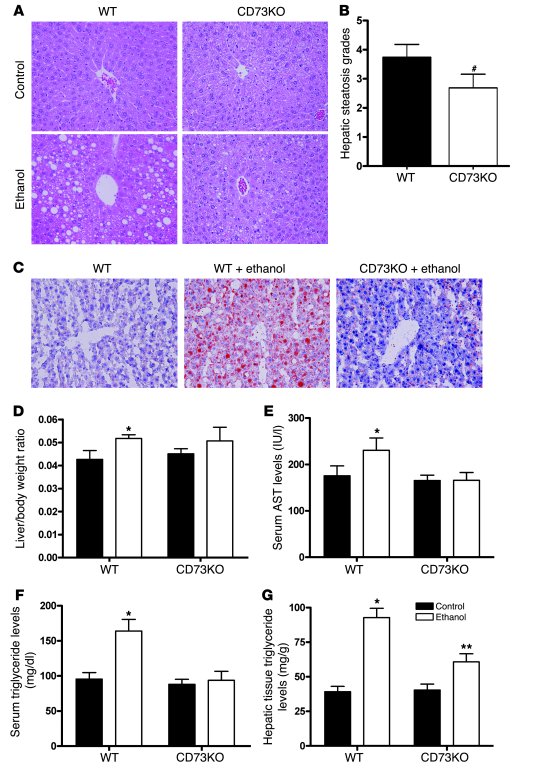