A role for microRNA in cystic liver and kidney diseases

A role for microRNA in cystic liver and kidney diseases

The polycystic liver and kidney diseases are a family of disorders with heterogeneous etiologies. Proposed mechanisms of disease include ciliary dysfunction, excess cell proliferation, and altered cell-cell or cell-matrix interactions. In this issue of the JCI, Lee and colleagues provide data to support a novel mechanism for cystogenesis involving microRNA (miRNA) (see the related article beginning on page 3714). They demonstrate that levels of the miRNA miR15a are decreased in livers of patients with autosomal recessive and autosomal dominant polycystic kidney disease (ARPKD and ADPKD, respectively) and congenital hepatic fibrosis as well as in the PKC rat model of ARPKD. This results in increased expression of the cell-cycle regulator Cdc25A, which is a direct target of miR15a, and increased cellular proliferation and cystogenesis in vitro. These findings suggest that other miRNAs may also participate in the molecular pathogenesis of cystic liver and kidney diseases. 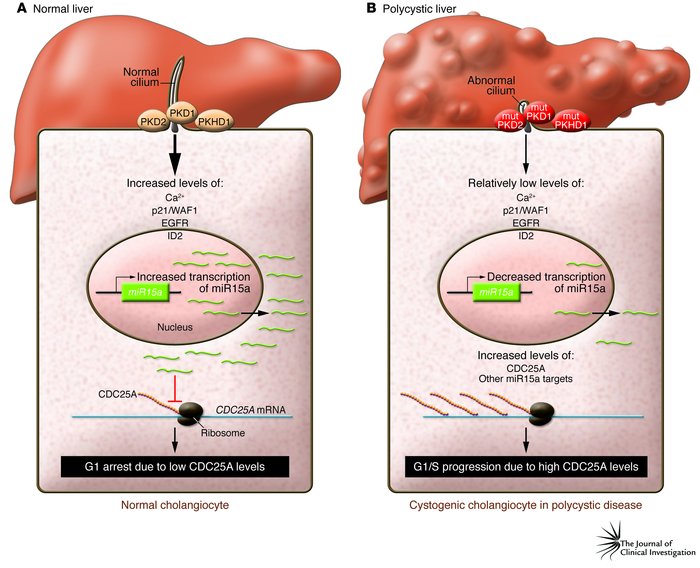 () In normal cholangiocytes, ciliary signaling results in increased levels of intracellular Ca2+, p21/WAF1, EGFR (in the cell membrane), and nuclear ID2 (). These and/or other events result in miR15a expression and CDC25A repression. Decreased levels of CDC25A then lead to G1 arrest, preventing cyst formation. () As demonstrated in this issue of the by Lee and colleagues (), miR15a levels are reduced in PCK rat cholangiocytes and in ARPKD, CHF, and ADPKD liver specimens. In the rat, ARPKD, and CHF, the gene is mutated [mutPKDH1], while in ADPKD, either or is mutated. CDC25A levels are increased in these same tissues. Using antisense oligonucleotide knockdown of miR15a in rat cholangiocytes, Lee and colleagues confirmed that reduction of miR15a results in elevated Cdc25A levels, increased cell proliferation, and cyst growth in vitro, while overexpression of miR15a in cholangiocytes has the opposite effect.