Tumors contain oxygenated and hypoxic regions, so the tumor cell population is heterogeneous. Hypoxic tumor cells primarily use glucose for glycolytic energy production and release lactic acid, creating a lactate gradient that mirrors the oxygen gradient in the tumor. By contrast, oxygenated tumor cells have been thought to primarily use glucose for oxidative energy production. Although lactate is generally considered a waste product, we now show that it is a prominent substrate that fuels the oxidative metabolism of oxygenated tumor cells. There is therefore a symbiosis in which glycolytic and oxidative tumor cells mutually regulate their access to energy metabolites. We identified monocarboxylate transporter 1 (MCT1) as the prominent path for lactate uptake by a human cervix squamous carcinoma cell line that preferentially utilized lactate for oxidative metabolism. Inhibiting MCT1 with α-cyano-4-hydroxycinnamate (CHC) or siRNA in these cells induced a switch from lactate-fueled respiration to glycolysis. A similar switch from lactate-fueled respiration to glycolysis by oxygenated tumor cells in both a mouse model of lung carcinoma and xenotransplanted human colorectal adenocarcinoma cells was observed after administration of CHC. This retarded tumor growth, as the hypoxic/glycolytic tumor cells died from glucose starvation, and rendered the remaining cells sensitive to irradiation. As MCT1 was found to be expressed by an array of primary human tumors, we suggest that MCT1 inhibition has clinical antitumor potential. 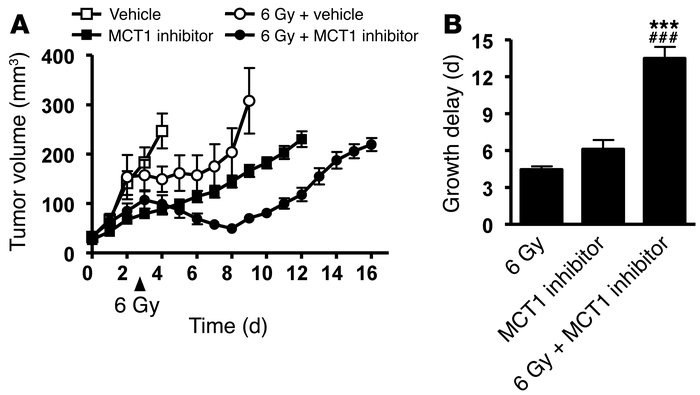