The renin-angiotensin system plays a role in the etiology of hypertension and the pathophysiology of cardiac and renal diseases in humans. Ang II is the central product of this system and is involved in regulating immune responses, inflammation, cell growth, and proliferation by acting through Ang II type 1 receptors (AT1 and AT2). Here, we show that targeted disruption of the Agtr1a gene that encodes AT1A results in marked prolongation of life span in mice. Agtr1a–/– mice developed less cardiac and vascular injury, and multiple organs from these mice displayed less oxidative damage than wild-type mice. The longevity phenotype was associated with an increased number of mitochondria and upregulation of the prosurvival genes nicotinamide phosphoribosyltransferase (Nampt) and sirtuin 3 (Sirt3) in the kidney. In cultured tubular epithelial cells, Ang II downregulated Sirt3 mRNA, and this effect was inhibited by an AT1 antagonist. These results demonstrate that disruption of AT1 promotes longevity in mice, possibly through the attenuation of oxidative stress and overexpression of prosurvival genes, and suggests that the Ang II/AT1 pathway may be targeted to influence life span in mammals. 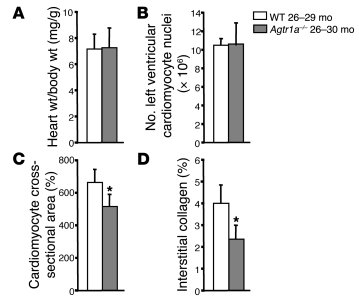 Paraffin-embedded hearts ( mice, = 7, 26 to 30 months old; wild-type mice, = 4, 26 to 29 months old) were sectioned at 5 μm for hematoxylin-eosin for morphometric studies and at 10 μm for collagen content stained with picrosirius solution. () Neither the ratio of heart weight/body weight, () nor the estimated number of left ventricular cardiomyocytes were effected by the absence of AT1A. () The cross-sectional area of cardiomyocytes, an index of hypertrophy, and () interstitial collagen, a marker of cardiac fibrosis, were significantly lower in mice. Data are mean ± SD. * < 0.01 versus wild-type mice by Student’s t test for impaired data.