Ewing sarcoma (EWS) is an aggressive bone tumor of uncertain cellular origin. CD99 is a membrane protein that is expressed in most cases of EWS, although its function in the disease is unknown. Here we have shown that endogenous CD99 expression modulates EWS tumor differentiation and malignancy. We determined that knocking down CD99 expression in human EWS cell lines reduced their ability to form tumors and bone metastases when xenografted into immunodeficient mice and diminished their tumorigenic characteristics in vitro. Further, reduction of CD99 expression resulted in neurite outgrowth and increased expression of β-III tubulin and markers of neural differentiation. Analysis of a panel of human EWS cells revealed an inverse correlation between CD99 and H-neurofilament expression, as well as an inverse correlation between neural differentiation and oncogenic transformation. As knockdown of CD99 also led to an increase in phosphorylation of ERK1/2, we suggest that the CD99-mediated prevention of neural differentiation of EWS occurs through MAPK pathway modulation. Together, these data indicate a new role for CD99 in preventing neural differentiation of EWS cells and suggest that blockade of CD99 or its downstream molecular pathway may be a new therapeutic approach for EWS.

Silencing of CD99 by shRNA plasmid. 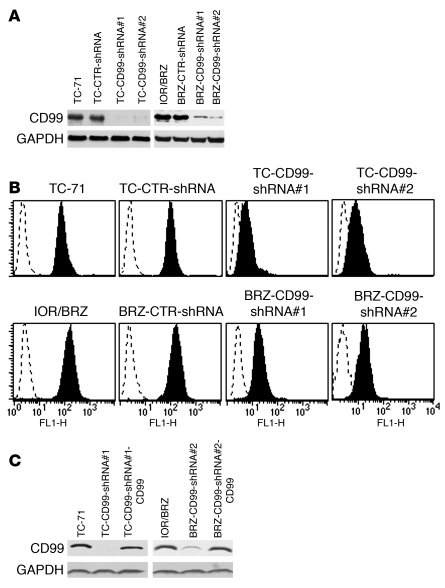