CD4+CD25+Foxp3+ Tregs suppress autoimmune responses. In addition, they limit T cell responses during chronic infection, thereby minimizing T cell–dependent immunopathology. We sought to investigate how Tregs are regulated in the livers of patients chronically infected with HCV, where they control the balance between an adequate protective immune response and suppression of immunopathology. We found that, despite accumulating and proliferating at sites of infection in the livers of patients chronically infected with HCV, Tregs were relatively less expanded than CD4+CD25+Foxp3– effector T cells. The relative lower expansion of intrahepatic Tregs coincided with their upregulation of programmed death–1 (PD-1). PD-1 expression inversely correlated with both Treg proliferation and clinical markers of immune suppression in vivo. Consistent with the possibility that PD-1 controls Tregs, blockade of the interaction between PD-1 and programmed death–1 ligand 1 (PD-L1) enhanced the in vitro expansion and function of Tregs isolated from the livers of patients chronically infected with HCV. Blockade of the interaction between PD-L1 and B7.1 also improved the proliferation of these cells. Interestingly, both PD-1 and phosphorylated STAT-5 were overexpressed in intrahepatic Tregs in a parallel fashion in steady disease conditions, and in an alternate-fluctuating fashion during the course of severe hepatitis reactivation. Notably, PD-L1 blockade upregulated STAT-5 phosphorylation in Tregs ex vivo. These data suggest that PD-L1 negatively regulates Tregs at sites of chronic inflammation by controlling STAT-5 phosphorylation.

Treg and Teff repertoire in liver and peripheral blood of HCV patients. 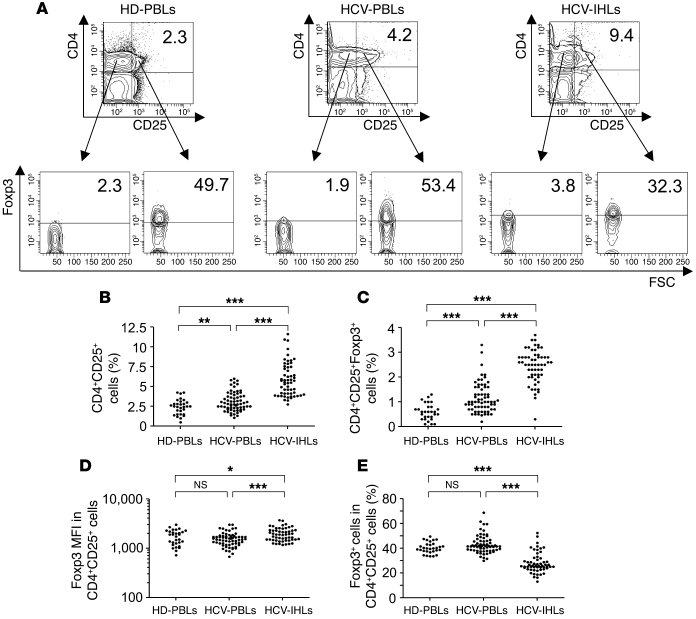