NHE4 is critical for the renal handling of ammonia in rodents

NHE4 is critical for the renal handling of ammonia in rodents

Ammonia absorption by the medullary thick ascending limb of Henle’s loop (MTALH) is thought to be a critical step in renal ammonia handling and excretion in urine, in which it is the main acid component. Basolateral Na+/H+ exchangers have been proposed to play a role in ammonia efflux out of MTALH cells, which express 2 exchanger isoforms: Na+/H+ exchanger 1 (NHE1) and NHE4. Here, we investigated the role of NHE4 in urinary acid excretion and found that NHE4–/– mice exhibited compensated hyperchloremic metabolic acidosis, together with inappropriate urinary net acid excretion. When challenged with a 7-day HCl load, NHE4–/– mice were unable to increase their urinary ammonium and net acid excretion and displayed reduced ammonium medulla content compared with wild-type littermates. Both pharmacologic inhibition and genetic disruption of NHE4 caused a marked decrease in ammonia absorption by the MTALH. Finally, dietary induction of metabolic acidosis increased NHE4 mRNA expression in mouse MTALH cells and enhanced renal NHE4 activity in rats, as measured by in vitro microperfusion of MTALH. We therefore conclude that ammonia absorption by the MTALH requires the presence of NHE4 and that lack of NHE4 reduces the ability of MTALH epithelial cells to create the cortico-papillary gradient of NH3/NH4+ needed to excrete an acid load, contributing to systemic metabolic acidosis. 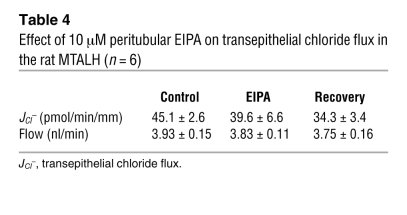