The three most prevalent human disorders of the CNS in which immunity and inflammation are likely to have vital roles (excluding infection of the CNS) are fever, multiple sclerosis (MS), and Alzheimer disease (AD). As reviewed here, cytokines are critical in the induction of fever, the pathogenesis of MS, and the pathobiology of AD. Indeed, antibodies targeting cytokines have been used as a therapy for individuals with unusual and persistent febrile reactions not responsive to common antipyretics, while a recombinant cytokine is the most popular treatment for the relapsing-remitting form of MS. Although cytokine-modulating therapies are not currently in clinical use for the treatment of AD, cytokines can ameliorate disease pathology in certain experimental models of AD, suggesting a potential for future therapeutic opportunities.

Many cytokines influence the pathogenesis of MS. 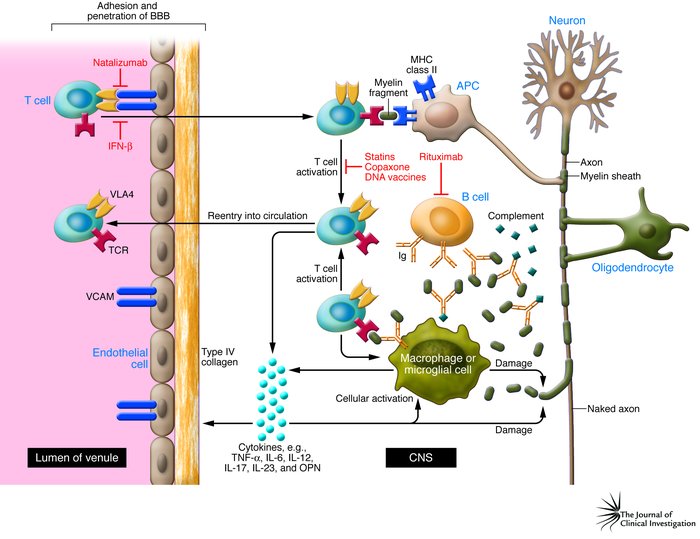 MS is a neurodegenerative autoimmune disease of the white matter of the CNS in which cytokines have an important role. Some cytokines, such as IL-6, IL-17, TGF-β, and IFN-γ, trigger an inflammatory response in the white matter of the brain. Such inflammatory responses contribute to the development of plaques (the characteristic pathology of MS) in the white matter by stripping myelin from neurons. Other molecules that regulate cytokines (e.g., osteopontin [OPN]) may increase Th17 and IFN-γ production. In addition, the most popular treatment for individuals with MS is the cytokine IFN-β, which is though to attenuate the action of the proinflammatory cytokines. Depicted are other potential therapies that may involve blockade of IFN-γ, IL-6, IL-12, or IL-23. Therapies aimed at blocking the adaptive immune response include DNA vaccination to induce tolerance. Statins and Copaxone are aimed at treatment of innate immune pathways and at the immune synapse. The most potent approved therapy for MS, natalizumab, blocks α4β1 integrin (verly late antigen 4 [VLA4]) interactions with VCAM. Depletion of B cells with anti-CD20 may be a promising therapeutic approach (all these approaches are discussed in refs. , , and ). Adapted with permission from ().