Fifty years later: the disk goes to the prom

Fifty years later: the disk goes to the prom

Although age-related macular degeneration is the most prevalent macular disease in the world, numerous discoveries regarding the molecular bases of vision have been made through genetic association studies of rare inherited maculopathies. In this issue of the JCI, Yang et al. present a functional genetics study that identifies a role for prominin 1 (PROM1), best known as a stem cell and/or progenitor cell marker, in the biogenesis of retinal photoreceptor disk arrays (see the related article beginning on page 2908). This study supports an established model in which disk morphogenesis occurs through membrane evagination and extends other recent studies assigning PROM1 important functions outside of the stem cell niche. 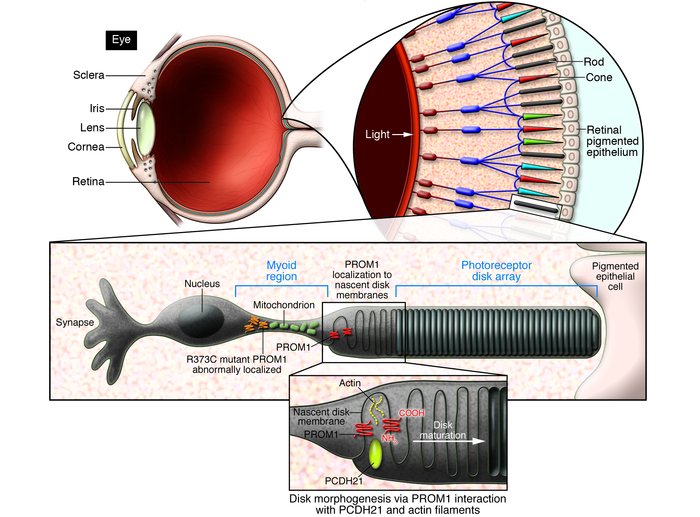 The rod photoreceptor cell consists of an outer segment containing an array of rhodopsin-loaded disks, a myoid region containing mitochondria, nucleus, and other organelles, and a synapse region that connects to the neural retinal network to transmit visual stimuli. PROM1 normally localizes to the nascent disk membranes, but in the case of the existence of an R373C mutation, the protein remains in the myoid region. In their study in this issue of the , Yang et al. show that PROM1 interacts with protocadherin 21 (PCDH21) and actin filaments to regulate disk morphogenesis and subsequent maturation from evaginating nascent disk membranes ().