Chromosome translocation to generate the TEL-AML1 (also known as ETV6-RUNX1) chimeric fusion gene is a frequent and early or initiating event in childhood acute lymphoblastic leukemia (ALL). Our starting hypothesis was that the TEL-AML1 protein generates and maintains preleukemic clones and that conversion to overt disease requires secondary genetic changes, possibly in the context of abnormal immune responses. Here, we show that a murine B cell progenitor cell line expressing inducible TEL-AML1 proliferates at a slower rate than parent cells but is more resistant to further inhibition of proliferation by TGF-β. This facilitates the competitive expansion of TEL-AML1–expressing cells in the presence of TGF-β. Further analysis indicated that TEL-AML1 binds to a principal TGF-β signaling target, Smad3, and compromises its ability to activate target promoters. In mice expressing a TEL-AML1 transgene, early, pre-pro-B cells were increased in number and also showed reduced sensitivity to TGF-β–mediated inhibition of proliferation. Moreover, expression of TEL-AML1 in human cord blood progenitor cells led to the expansion of a candidate preleukemic stem cell population that had an early B lineage phenotype (CD34+CD38–CD19+) and a marked growth advantage in the presence of TGF-β. Collectively, these data suggest a plausible mechanism by which dysregulated immune responses to infection might promote the malignant evolution of TEL-AML1–expressing preleukemic clones. 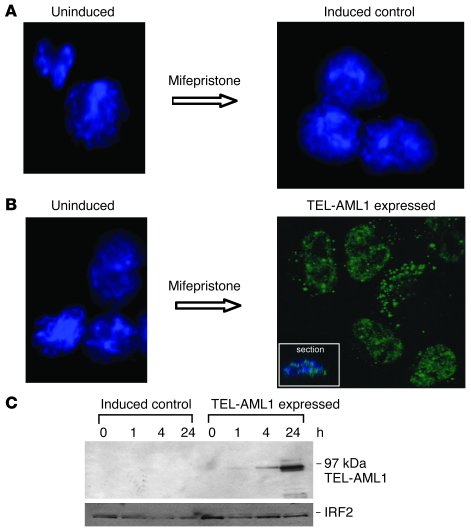