Recognition of LPS by TLR4 on immune sentinel cells such as macrophages is thought to be key to the recruitment of neutrophils to sites of infection with Gram-negative bacteria. To explore whether endothelial TLR4 plays a role in this process, we engineered and imaged mice that expressed TLR4 exclusively on endothelium (known herein as EndotheliumTLR4 mice). Local administration of LPS into tissue induced comparable neutrophil recruitment in EndotheliumTLR4 and wild-type mice. Following systemic LPS or intraperitoneal E. coli administration, most neutrophils were sequestered in the lungs of wild-type mice and did not accumulate at primary sites of infection. In contrast, EndotheliumTLR4 mice showed reduced pulmonary capillary neutrophil sequestration over the first 24 hours; as a result, they mobilized neutrophils to primary sites of infection, cleared bacteria, and resisted a dose of E. coli that killed 50% of wild-type mice in the first 48 hours. In fact, the only defect we detected in EndotheliumTLR4 mice was a failure to accumulate neutrophils in the lungs following intratracheal administration of LPS; this response required TLR4 on bone marrow–derived immune cells. Therefore, endothelial TLR4 functions as the primary intravascular sentinel system for detection of bacteria, whereas bone marrow–derived immune cells are critical for pathogen detection at barrier sites. Nonendothelial TLR4 contributes to failure to accumulate neutrophils at primary infection sites in a disseminated systemic infection.

TLR4 is only expressed on the endothelium in the EndotheliumTLR4 mice. 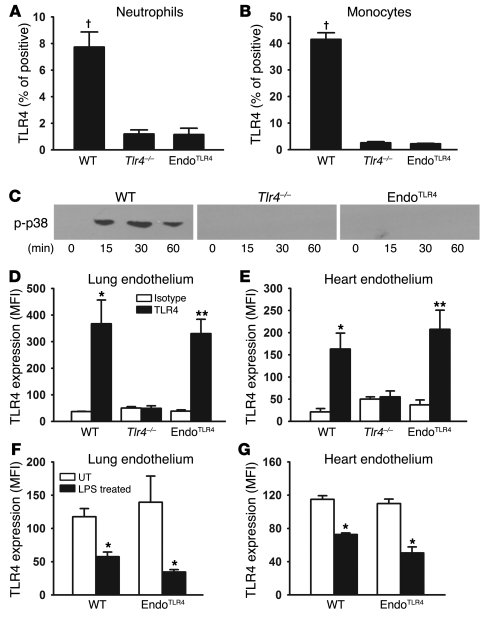 TLR4 expression on () neutrophils and () monocytes from wild-type, , and EndotheliumTLR4 (EndoTLR4) mice was assessed by flow cytometry. () Phospho-p38 (p-p38) activation of peritoneal macrophages from wild-type, , and EndotheliumTLR4 mice treated for 0, 15, 30, and 60 minutes with LPS was assessed by Western blot. TLR4 expression on the primary culture endothelial cells of () lung and () heart was assessed by flow cytometry. () Lung or () heart endothelium was harvested prior to or 4 hours following LPS administration without culturing, and TLR4 expression was immediately measured by flow cytometry. Data are presented as the arithmetic mean ± SEM ( = 3 to 5 in each group). † < 0.01 versus neutrophils or monocytes from and EndotheliumTLR4 mice; * < 0.05, ** < 0.01 versus isotype or endothelium. UT, untreated.