Asthma and chronic obstructive pulmonary disease (COPD) are very common inflammatory diseases of the airways. They both cause airway narrowing and are increasing in incidence throughout the world, imposing enormous burdens on health care. Cytokines play a key role in orchestrating the chronic inflammation and structural changes of the respiratory tract in both asthma and COPD and have become important targets for the development of new therapeutic strategies in these diseases. 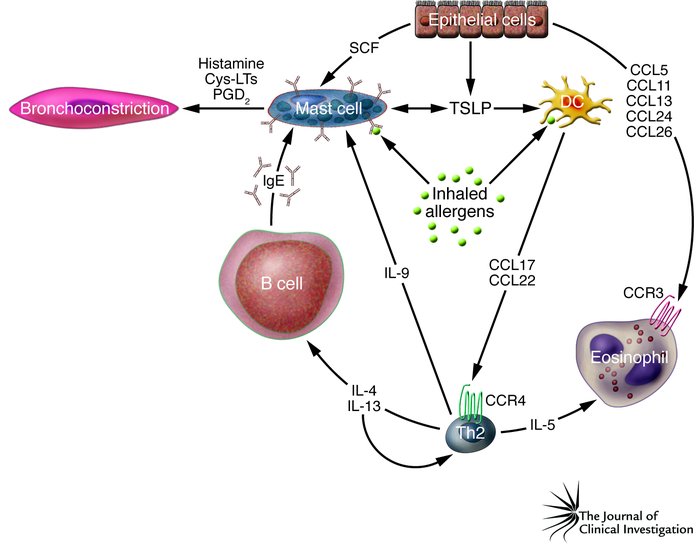 Epithelial cells play an important role in orchestrating the inflammation of asthma through the release of multiple cytokines, including SCF (which maintains mast cells in the airways), TSLP (which acts on DCs to release the Th2 chemoattractants CCL17 and CCL22, which act via CCR4), and several chemokines that attract eosinophils by activating CCR3. Th2 cells orchestrate the inflammatory response in asthma through the release of IL-4 and IL-13 (which stimulate B cells to synthesize IgE), IL-5 (which is necessary for eosinophilic inflammation), and IL-9 (which stimulates mast cell proliferation). Mast cells are thus orchestrated by several interacting cytokines and play an important role in asthma through the release of the bronchoconstrictor mediators histamine, cysteinyl-leukotrienes (Cys-LTs), and PGD2. Adapted with permission from Nature Publishing Group ().