Analysis of nuclear shape in primary MEFs from , , , , and embryos by immunofluorescence microscopy. 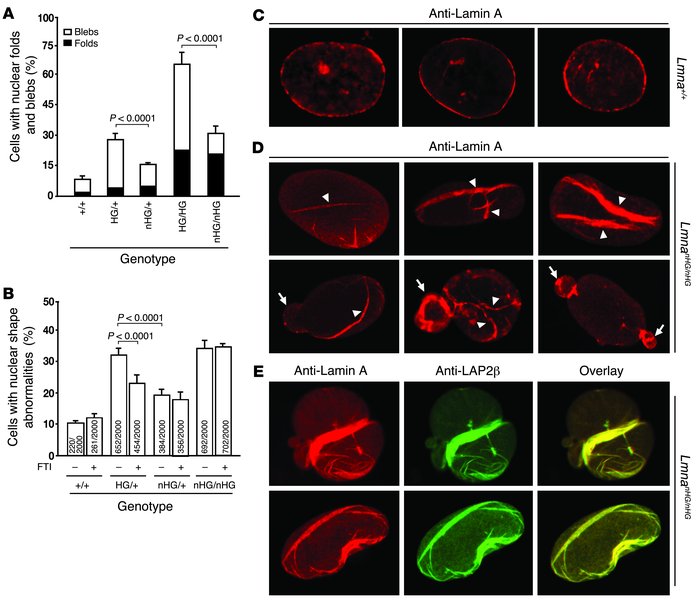 () The frequency of misshapen nuclei (folds, black bars; blebs, white bars) was greater in and MEFs than in MEFs, but the frequency of misshapen nuclei was lower in and MEFs than in and MEFs, respectively ( 3–8 cell lines/genotype, >1000 cells counted for 3 fibroblast cell lines of each genotype 0.0001, χ2 test). Error bars indicate SEM for results with independently isolated cells of the same genotype. The fraction of abnormal nuclei that had nuclear folds was higher in MEFs than in MEFs and higher in MEFs than in MEFs ( 0.0001). () Frequency of misshapen nuclei in , , and MEFs in the presence and absence of an FTI (10 μM, ABT-100). The FTI reduced the number of misshapen nuclei in MEFs, and an FTI had no effect on MEFs ( 4 cell lines/genotype; 0.0001, χ2 test). In and MEFs, the FTI treatment had no significant effect on nuclear shape ( 4 cell lines/genotype; 4,000 cells/genotype counted). Ratios in each bar represent the number of cells with misshapen nuclei divided by the total number of cells evaluated (from all cell lines of each genotype). Error bars indicate SEM. Similar results, with identical levels of statistical significance, were obtained by 3 independent observers — all blinded to genotype. () Immunostaining of wild-type MEFs with a lamin A–specific antibody (red). () Immunostaining of MEFs with a lamin A–specific antibody (red). Blebs are indicated by white arrows, and folds are indicated by white arrowheads. () The localization of progerin (red) and LAP2β (green) in MEFs; both proteins were concentrated in nuclear folds. Images were recorded with a ×63 oil immersion objective (–).