Naturally occurring CD4+CD25hiFoxp3+ Tregs (nTregs) are highly proliferative in blood. However, the kinetics of their accumulation and proliferation during a localized antigen-specific T cell response is currently unknown. To explore this, we used a human experimental system whereby tuberculin purified protein derivative (PPD) was injected into the skin and the local T cell response analyzed over time. The numbers of both CD4+Foxp3– (memory) and CD4+Foxp3+ (putative nTreg) T cells increased in parallel, with the 2 populations proliferating at the same relative rate. In contrast to CD4+Foxp3– T cell populations, skin CD4+Foxp3+ T cells expressed typical Treg markers (i.e., they were CD25hi, CD127lo, CD27+, and CD39+) and did not synthesize IL-2 or IFN-γ after restimulation in vitro, indicating that they were not recently activated effector cells. To determine whether CD4+Foxp3+ T cells in skin could be induced from memory CD4+ T cells, we expanded skin-derived memory CD4+ T cells in vitro and anergized them. These cells expressed high levels of CD25 and Foxp3 and suppressed the proliferation of skin-derived responder T cells to PPD challenge. Our data therefore demonstrate that memory and CD4+ Treg populations are regulated in tandem during a secondary antigenic response. Furthermore, it is possible to isolate effector CD4+ T cell populations from inflamed tissues and manipulate them to generate Tregs with the potential to suppress inflammatory responses. 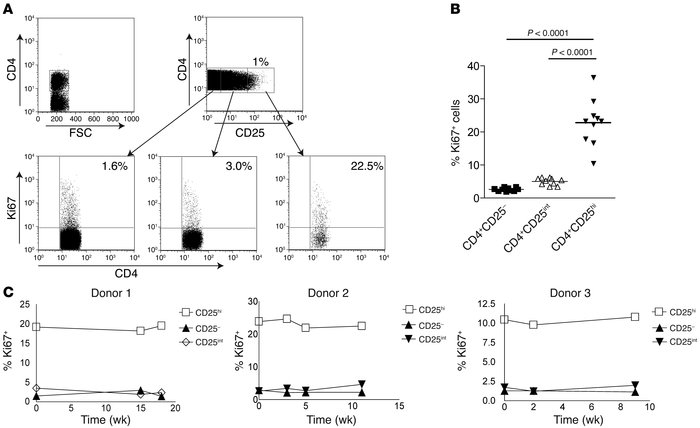 Freshly isolated PBMCs from healthy individuals were stained for CD4/CD25/CD127/Foxp3 and Ki67 following the standard protocol. Tregs were identified as CD25hi, Foxp3+, and CD127lo (for details, see Supplemental Figure 1). () Expression of Ki67 on CD4+CD25hi, CD4+CD25int, and CD4+CD25– cells from a representative sample. Numbers denote the percentage of cells expressing Ki67 relative to the control gate set with an irrelevant antibody. FSC, forward scatter. () Cumulative data showing the percentage of Ki67+ cells in each subset. Each symbol represents a different individual ( = 10 per group), and the mean percentage is shown as a horizontal line. Significance was determined by paired test. () Graphs show expression of Ki67 in Treg and non-Treg populations examined over the course of 4 months in 3 individuals.