Following the cytokine signaling pathway to leukemogenesis: a chronology

Following the cytokine signaling pathway to leukemogenesis: a chronology

Studies over the past 50 years revealing the molecular events that promote normal T lymphocyte cycle competence and progression led to a detailed understanding of how cytokines function to regulate normal hematopoietic cell proliferation. During that same period, the molecular and genetic changes introduced by the Philadelphia chromosome in chronic myelogenous leukemia were unraveled, and these have led to an understanding of how mutations that constitutively activate normal cytokine signaling pathways can cause unregulated cell proliferation and malignant transformation. Based on the paradigm established by these data, it is inescapable that going forward, investigators will operate under the hypothesis that transformation of additional cells and tissues will have a similar pathogenesis. 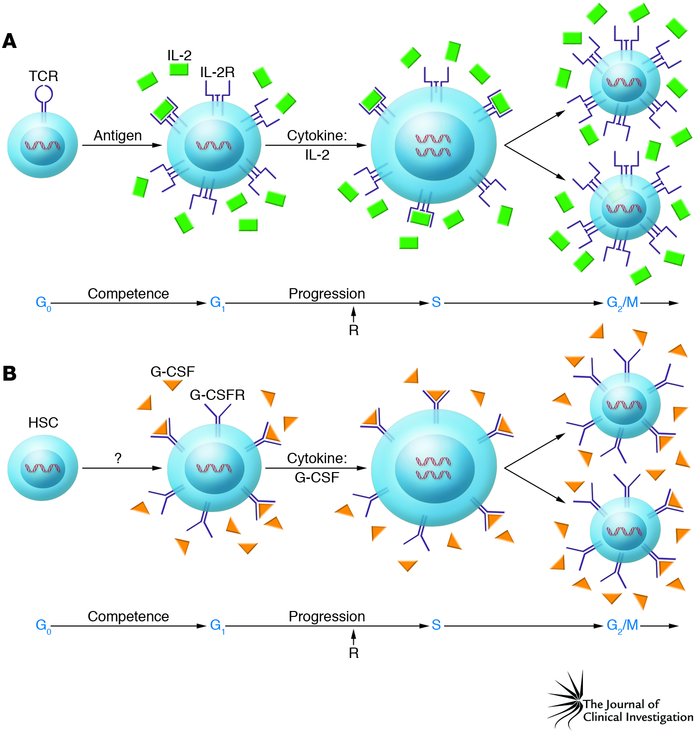 () T lymphocytes are normally in the resting, or G0, phase of the cell cycle. Signals from the TCR promote the transition from G0 to G1, which renders the cells competent to progress further through the cell cycle by stimulating the expression of the genes encoding IL-2 and the subunits of IL-2R. Subsequently, the IL-2–IL-2R interaction is responsible for blastic transformation and G1 progression, which moves the cell through the G1 phase of the cell cycle to the point that the cells no longer require signals from the IL-2–IL-2R interaction (i.e., past the R-point [R]) to enter S phase and subsequently undergo mitosis. () HSCs, like resting mature T lymphocytes, are also normally in G0. Unlike the T lymphocyte lineage, little is known regarding the cytokines and receptors responsible for stimulating the HSCs to leave G0 and enter the cell cycle. Even so, once this G0-G1 transition occurs and an HSC has given rise to a committed progenitor cell, such as a committed granulocyte precursor, the cytokines responsible for G1 progression are known, and this is exemplified in the figure by G-CSF acting on a committed granulocyte precursor to promote the progression from the G1 to the S, G2, and M phases.