In acute inflammation, infiltrating polymorphonuclear leukocytes (also known as PMNs) release preformed granule proteins having multitudinous effects on the surrounding environment. Here we present what we believe to be a novel role for PMN-derived proteins in bacterial phagocytosis by both human and murine macrophages. Exposure of macrophages to PMN secretion markedly enhanced phagocytosis of IgG-opsonized Staphylococcus aureus both in vitro and in murine models in vivo. PMN secretion activated macrophages, resulting in upregulation of the Fcγ receptors CD32 and CD64, which then mediated the enhanced phagocytosis of IgG-opsonized bacteria. The phagocytosis-stimulating activity within the PMN secretion was found to be due to proteins released from PMN primary granules; thorough investigation revealed heparin-binding protein (HBP) and human neutrophil peptides 1–3 (HNP1–3) as the mediators of the macrophage response to PMN secretion. The use of blocking antibodies and knockout mice revealed that HBP acts via β2 integrins, but the receptor for HNP1–3 remained unclear. Mechanistically, HBP and HNP1–3 triggered macrophage release of TNF-α and IFN-γ, which acted in an autocrine loop to enhance expression of CD32 and CD64 and thereby enhance phagocytosis. Thus, we attribute what may be a novel role for PMN granule proteins in regulating the immune response to bacterial infections. 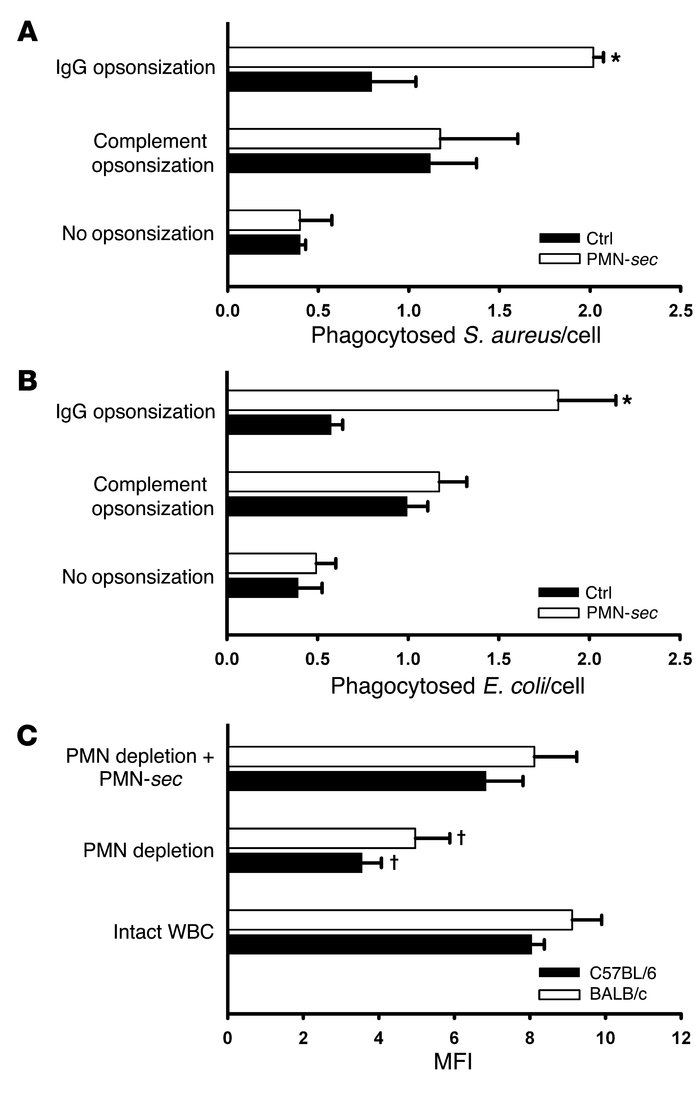 ( and ) Human macrophages were treated with PMN or medium alone (ctrl) for 24 hours. After stimulation, fluorescent () or () were injected into the medium. Bacteria were either opsonized with IgG or with complement or left nonopsonized. The number of incorporated bacteria per cell was quantified by fluorescence microscopy. For each analysis, 3–6 independent experiments were performed. * < 0.05 versus respective control. () Comparison of phagocytic activity of peritoneal macrophages obtained from BALB/c or C57BL/6 mice. Macrophages were isolated from mice with intact WBC, neutropenic mice, and from neutropenic mice treated with PMN. MFI as a measure of phagocytosed IgG-opsonized bacteria was read in a plate reader. For each analysis, 6 independent experiments were performed. † < 0.05 versus intact WBC and PMN depletion plus PMN- of the respective strain.