The PKC inhibitor AEB071 may be a therapeutic option for psoriasis

The PKC inhibitor AEB071 may be a therapeutic option for psoriasis

PKC isoforms t, α, and β play fundamental roles in the activation of T cells and other immune cell functions. Here we show that the PKC inhibitor AEB071 both abolishes the production of several cytokines by activated human T cells, keratinocytes, and macrophages in vitro and inhibits an acute allergic contact dermatitis response in rats. To translate these findings into humans, single and multiple ascending oral doses of AEB071 were administered to healthy volunteers and patients with psoriasis, respectively. AEB071 was well tolerated with no clinically relevant laboratory abnormalities. Ex vivo stimulation of lymphocytes from subjects exposed to single doses of AEB071 resulted in a dose-dependent inhibition of both lymphocyte proliferation and IL2 mRNA expression. Clinical severity of psoriasis was reduced up to 69% compared with baseline after 2 weeks of treatment, as measured by the Psoriasis Area Severity Index (PASI) score. The improvement in psoriasis patients was accompanied by histological improvement of skin lesions and may be partially explained by a substantial reduction of p40+ dermal cells, which are known to mediate psoriasis. These data suggest that AEB071 could be an effective novel treatment regimen for psoriasis and other autoimmune diseases, and that AEB071 warrants long-term studies to establish safety and efficacy. 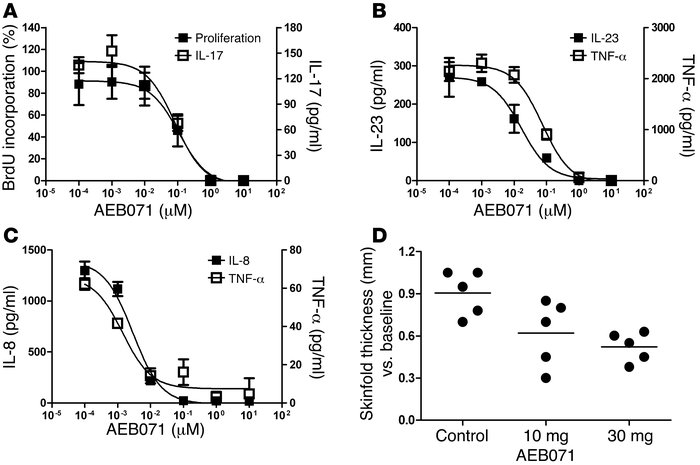