B-RAF is frequently mutated in solid tumors, resulting in activation of the MEK/ERK signaling pathway and ultimately tumor cell growth and survival. MEK inhibition in these cells results in cell cycle arrest and cytostasis. Here, we have shown that MEK inhibition also triggers limited apoptosis of human tumor cell lines with B-RAF mutations and that this effect was dependent on upregulation and dephosphorylation of the proapoptotic, Bcl-2 homology 3–only (BH3-only) Bcl-2 family member Bim. However, upregulation of Bim was insufficient for extensive apoptosis and was countered by overexpression of Bcl-2. To overcome apoptotic resistance, we treated the B-RAF mutant cells both with MEK inhibitors and with the BH3 mimetic ABT-737, resulting in profound synergism and extensive tumor cell death. This treatment was successful because of both efficient antagonism of the prosurvival Bcl-2 family member Mcl-1 by Bim and inhibition of Bcl-2 and Bcl-xL by ABT-737. Critically, addition of ABT-737 converted the predominantly cytostatic effect of MEK inhibition to a cytotoxic effect, causing long-term tumor regression in mice xenografted with human tumor cell lines. Thus, the therapeutic efficacy of MEK inhibition requires concurrent unleashing of apoptosis by a BH3 mimetic and represents a potent combination treatment for tumors harboring B-RAF mutations. 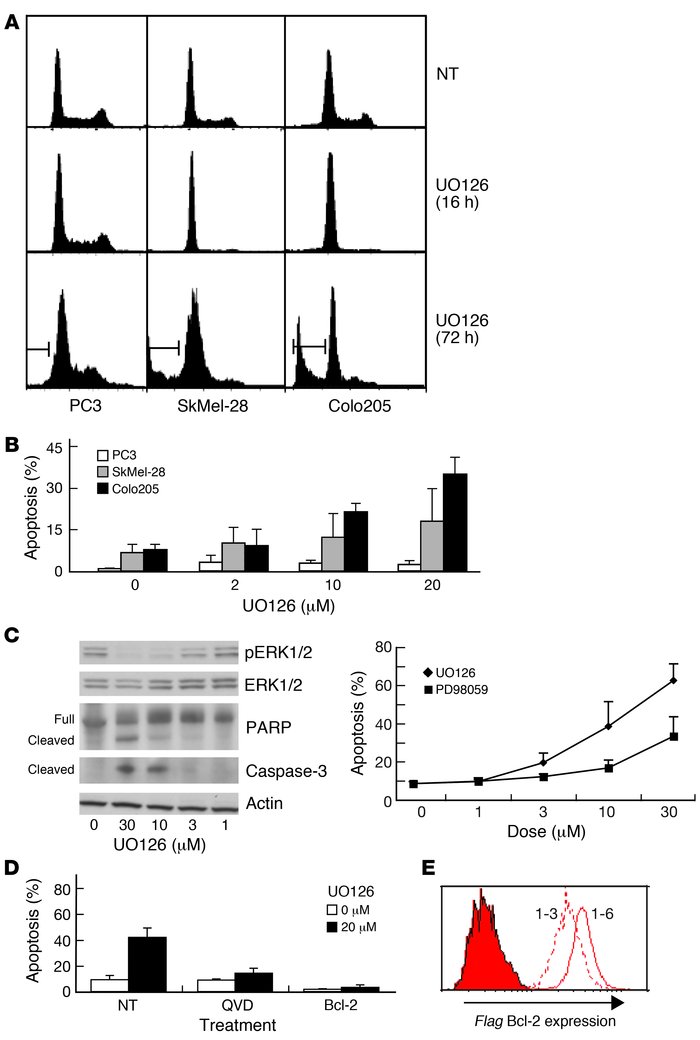 ( and ) WT (PC3) or mutant (SkMel-28 and Colo205) cells were not treated (NT) or were treated for 16 or 72 h with the MEK inhibitor UO126 (20 μM unless otherwise indicated), and DNA content was determined by FACS analysis. () Illustrative FACS plots show untreated cells, cells undergoing G1 arrest and apoptosis after 16 and 72 h, respectively, of UO126 treatment. Bars denote sub-G1 DNA content. () Percent cells with sub-G1 DNA content at 72 h. () Colo205 cells were treated for 48 h with the indicated doses of UO126 or PD98059. Cells were analyzed by Western blotting for phosphorylated ERK (pERK1/2), total ERK, PARP, cleaved caspase-3, and β-actin as loading control and were also assessed for cell death (shown at right). For and , data are mean ± SD of 3 independent experiments. () Colo205 cells were not treated or were incubated with 25 μM QVD-OPH (QVD) for 30 min prior to addition of 20 μM UO126 and assessed after 48 h for cell death and cell cycle. Colo205 cells overexpressing FLAG–Bcl-2 were assessed in the same manner. Data are mean ± SD of 3 independent experiments using both FLAG–Bcl-2 clones. () Bcl-2 expression levels for clones 1-3 and 1-6. Filled histogram represents staining with a control antibody.