Type 2 congenital long QT syndrome (LQT-2) is linked to mutations in the human ether a-go-go–related gene (HERG) and is characterized by rate-corrected QT interval (QTc) prolongation, ventricular arrhythmias, syncope, and sudden death. Recognized triggers of these cardiac events include emotional and acoustic stimuli. Here we investigated the repeated occurrence of fever-induced polymorphic ventricular tachycardia and ventricular fibrillation in 2 LQT-2 patients with A558P missense mutation in HERG. ECG analysis showed increased QTc with fever in both patients. WT, A558P, and WT+A558P HERG were expressed heterologously in HEK293 cells and were studied using biochemical and electrophysiological techniques. A558P proteins showed a trafficking-deficient phenotype. WT+A558P coexpression caused a dominant-negative effect, selectively accelerated the rate of channel inactivation, and reduced the temperature-dependent increase in the WT current. Thus, the WT+A558P current did not increase to the same extent as the WT current, leading to larger current density differences at higher temperatures. A similar temperature-dependent phenotype was seen for coexpression of the trafficking-deficient LQT-2 F640V mutation. We postulate that the weak increase in the HERG current density in WT-mutant coassembled channels contributes to the development of QTc prolongation and arrhythmias at febrile temperatures and suggest that fever is a potential trigger of life-threatening arrhythmias in LQT-2 patients.

Genetic and sequence analysis of the A558P HERG mutation. 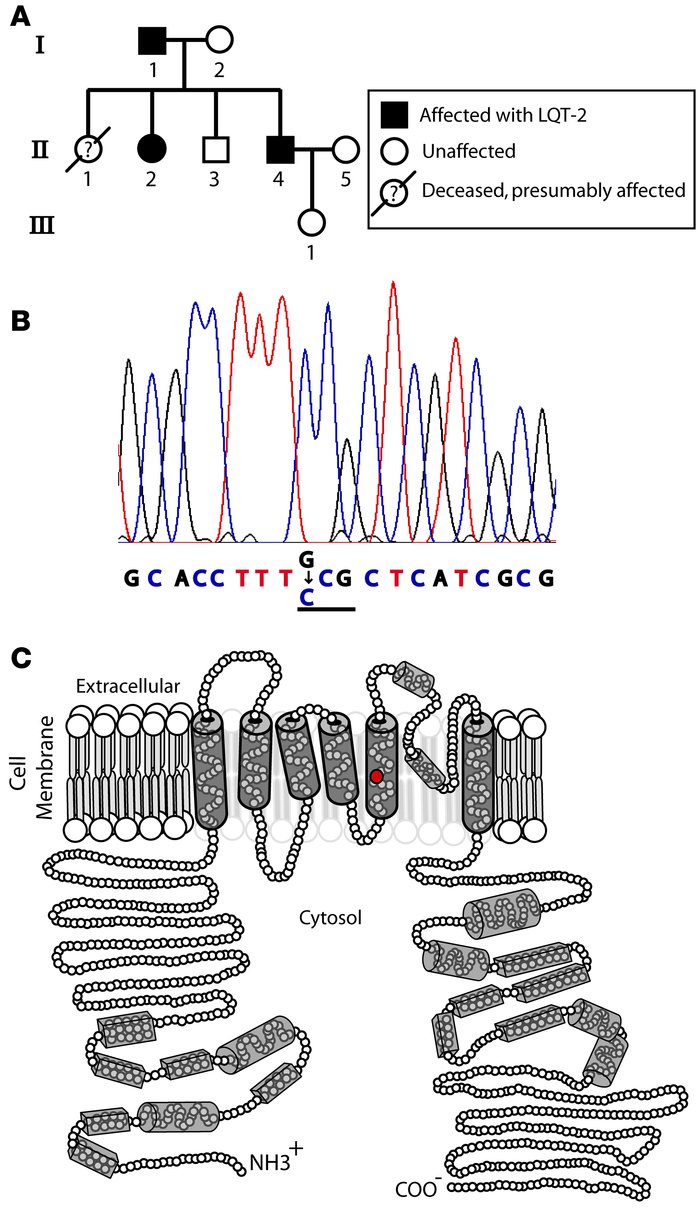 () Pedigree of the family with the A558P HERG mutation. Mutation analysis in 10 siblings of generation I identified only 1 patient (I-1) as carrier of the A558P mutation (see ref. ). () DNA sequence analysis displaying the G to C substitution at position 1,672 of exon 7. () Cartoon of a single subunit of the functional HERG channel, illustrating its 6 transmembrane segments and the location of the A558P mutation as a red dot in the S5 segment. The pore region is located between the S5 and S6 segments. The cylinders and the bars represent putative α helices and β sheets, respectively. Four such subunits coassemble in a tetrameric structure to form 1 functional HERG channel in the cell membrane.