Increased hunger and food intake during attempts to maintain weight loss are a critical problem in clinical management of obesity. To determine whether reduced body weight maintenance is accompanied by leptin-sensitive changes in neural activity in brain regions affecting regulatory and hedonic aspects of energy homeostasis, we examined brain region–specific neural activity elicited by food-related visual cues using functional MRI in 6 inpatient obese subjects. Subjects were assessed at their usual weight and, following stabilization at a 10% reduced body weight, while receiving either twice daily subcutaneous injections of leptin or placebo. Following weight loss, there were predictable changes in neural activity, many of which were reversed by leptin, in brain areas known to be involved in the regulatory, emotional, and cognitive control of food intake. Specifically, following weight loss there were leptin-reversible increases in neural activity in response to visual food cues in the brainstem, culmen, parahippocampal gyrus, inferior and middle frontal gyri, middle temporal gyrus, and lingual gyrus. There were also leptin-reversible decreases in activity in response to food cues in the hypothalamus, cingulate gyrus, and middle frontal gyrus. These data are consistent with a model of the weight-reduced state as one of relative leptin deficiency. 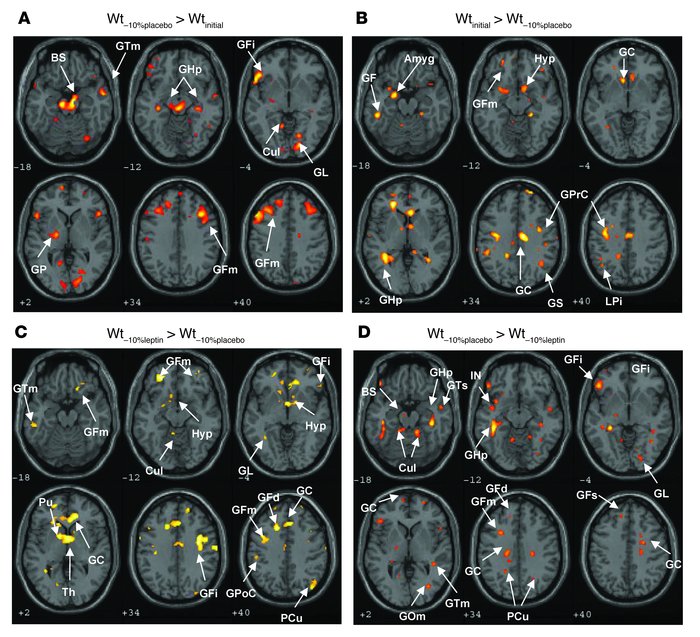