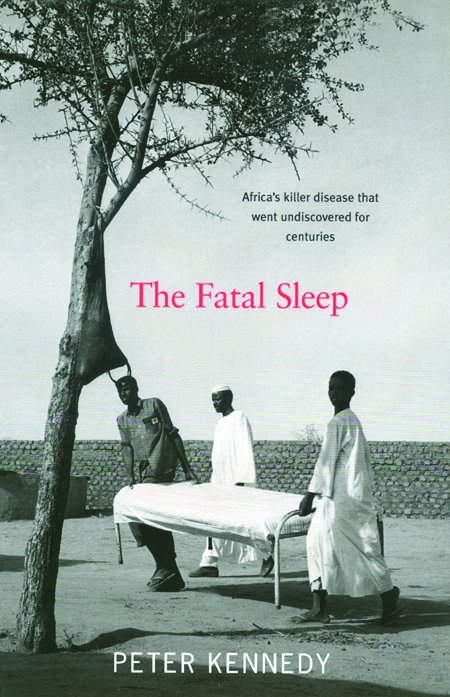 In the realm of tropical diseases, African trypanosomiasis has always offered researchers glamor, drama, and mystery. Numerous physicians have written accounts of their adventures amid the jungles, savannas, and coasts of equatorial Africa in their quest for a cure for sleeping sickness. Symptoms — caused by the African trypanosome, a single-celled parasite, and its transmission vector, the tsetse fly — arise mysteriously, and epidemics can start without warning. More than a century of research on trypanosomiasis has shown that the parasite is one of the most sophisticated pathogens ever to have evolved. In The fatal sleep: Africa’s killer disease that went undiscovered for centuries, Peter Kennedy presents a memoir about his fascination with this illness. His goal, he says in the preface, is “to tell the nonscientist about the history and profound importance of human African trypanosomiasis.” To achieve this goal, he relates his career experiences, first as a medical student in London, later as a clinical neurologist, and most importantly, as a researcher who, at the time of writing, had made 18 trips to Africa to study this disease. Many of his anecdotes, while not always specific to his disease-related research, offer portraits of his training as a physician-scientist and his experiences in Africa — the best of which relate his adventures in Zambia, Uganda, and Kenya. The reader will appreciate the author’s difficulty in rendering scientific ideas, particularly experimental results, into nonscientific language, which sometimes results in an uneven voice.

As Kennedy tells it, a thousand years ago a physician in Sudan reported a human disease characterized by fatal lethargy that seemed to be linked to the deaths of camels and horses. In 1771, naval surgeon John Atkins described a similar illness among natives of Guinea, where patients lingered unto death with “sleepy distemper.” In 1803, physician Thomas Winterbottom noted in Sierra Leone that slaves with swollen posterior cervical lymph nodes — now known as Winterbottom’s sign — could not be traded. The inveterate physician-explorer David Livingston, who tested in horses a cure for animal trypanosomiasis, published a letter in the British Medical Journal in May 1858 titled “Arsenic as a remedy for the tsetse fly bite.”

The disease first received international attention when an epidemic broke out at the end of the nineteenth century near Lake Victoria in present-day Uganda. Physician-scientists rushed to find preventions and cures that would protect both European colonists and their African workers. Kirk Arden Hoppe, in his book Lords of the fly (1), describes a “circus” of professional interest in sleeping sickness at the beginning of the twentieth century that eventually led to mass relocation of Africans out of tsetse fly–infested areas. Large areas of vegetation were burned in hopes of eliminating the tsetse fly, vast numbers of game were killed to extinguish the reservoir, and humans were forbidden to occupy emptied territories.

Today, epidemic trypanosomiasis occurs primarily where populations are disrupted by war, famine, and unrest. Two subspecies of African trypanosomes present slightly different courses of disease. Trypanosoma brucei gambiense in west and central Africa leads to a more indolent, but equally fatal, disease lasting months to years, whereas T. b. rhodesiense in east Africa is fatal within 3–4 months. The disease begins with itching, fever, skin chancre and/or rash, and malaise. Diagnosis is made by identifying parasites in the blood or spinal fluid or by the card agglutination trypanosomiasis test (CATT). Progressive disease leads to disturbances in personality, visual problems, and a variety of CNS symptoms (including sleep abnormalities and profound lethargy), followed by death.

DNA analysis suggests that African trypanosomes have evolved over 100 million years, including 3 million years in tandem with humans. The parasite evades the host immune system by changing its protein coat in a process known as antigenic variation. Such a change occurs as often as every 2 weeks and seems to preclude development of a vaccine. The disease is said to kill at least 50,000 people every year. More than 60 million people in sub-Saharan Africa are currently at risk for trypanosomiasis, with severe pockets of illness in the Central African Republic, Uganda, Angola, Congo-Kinshasa, and Sudan. As Kennedy points out, treatment options are few. A toxic arsenical administered intravenously is still used to treat late-stage disease; however, the treatment itself proves fatal in 1 of 20 patients.

A concise review article by Peter Kennedy on human sleeping sickness appeared in the JCI in 2004 (2). His book, as a memoir of a life in trypanosomiasis research, calls much-needed attention to a widespread disease of poor and isolated Africans, for whom pharmaceutical companies should spend more time developing therapeutic drugs. Notably, 50% of the author’s royalties from sales of this book will be donated to charities devoted to sleeping sickness research and human health in Africa.