The estrogen elixir: A history of hormone replacement therapy in America 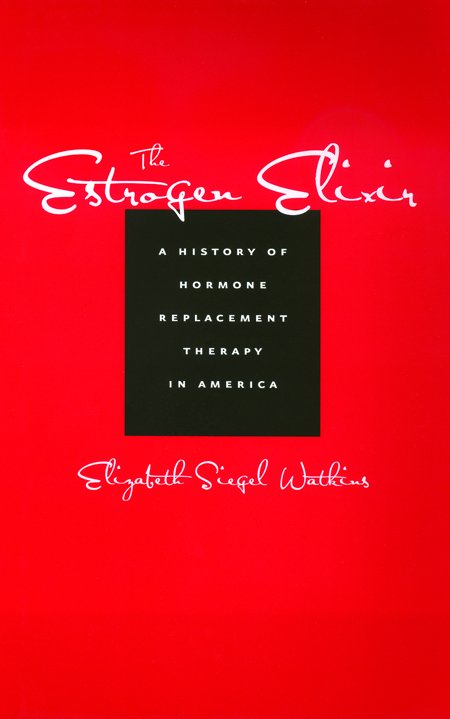 The estrogen elixir: a history of hormone replacement therapy in America by Elizabeth Siegel Watkins, an associate professor of the History of Medicine and Health Sciences at the University of California, San Francisco, is a valiant but incomplete attempt to review the contentious history of postmenopausal hormone therapy.

The history of antiaging elixirs dates back to ancient Egypt and perhaps earlier. This volume follows in essentially chronological manner from 1920 to 2005 the early development of estrogenic and progestogenic hormones. Their use and marketing is discussed with respect to changing medical and cultural concepts regarding menopause and female aging, a time line of select scientific publications, and women’s attitudes and perceptions. Also taken into account are the influence of the media, feminist health activists, government regulations, high-pressure promotion of hormone replacement by the pharmaceutical industry, and the prescribing habits of medical practitioners.

While multiple sources are reviewed within The estrogen elixir, a focus on the marketing of hormone therapies at the expense of a careful analysis of the scientific literature — including data believed by some to be flawed — is a weakness of the historical perspective provided. This has regrettably led to an incomplete description of considerably important early work and even some key current research.

A pivotal point in this history pertains to a recent reversal of general medical opinion stemming from the fact that in 2002, the NIH halted a large study that was part of the Women’s Health Initiative (WHI) clinical trial examining the effects of combined hormone therapy with estrogen and progestin in healthy women, suggesting an excess of risk over benefit of this therapy. Consequently, while the promotion of long-term estrogen-replacement therapy for almost all menopausal women was once widespread, it is now generally restricted to short-course therapy for women with severe symptoms. In this book, review of some key research is missing, mostly that which clearly warned of potential risks of therapy or provided a more balanced point of view regarding the risks versus benefits of therapy. The writings of the “estrogen evangelists” (my term) who refused to accept these negative findings are presented well here and in great detail. However, Watkins gives far too much credibility to the WHI study as the final word on the subject, particularly considering that more recent scientific publications and analyses, including studies from the WHI, have demonstrated the inherent risk of pronouncing that the final nail is in the coffin of hormone therapy.

This reader would have liked to have seen more recognition given to the growing influence of internet marketing, including the marketing of scientifically unsubstantiated home saliva hormone test kits and compounding pharmacy claims of unproven safety of “bioidenticals” — plant-derived natural estrogens that are biologically identical to hormones produced by the body, though not FDA approved for hormone therapy. The abrupt termination of the aforementioned WHI trial and resulting public confusion over the potential risks of continuing or discontinuing hormone therapy provided a strong impetus for this market upswing.

Watkins recognizes that hormone therapy has been prescribed for both therapeutic and preventive indications, but the distinction is not well clarified and sometimes the conclusions drawn are misleading. For instance, estrogen/progestin manufacturers are acknowledged for their role in raising public awareness of osteoporosis and fracture risk. What is not addressed, however, is the fact that far greater sums of money were spent by competitor companies to publicize the therapeutic utility of the bisphosphonates they manufactured, even though evidence indicated that hormones possess superior efficacy for osteoporosis prevention in postmenopausal women.

The lesson of this historical summary is that nothing stays the same; the pendulum continues to swing, even after the narrative of this book ends, as researchers weigh the risks and benefits of this therapy. As with all therapies, drug risk and benefit need to be individualized based on scientific evidence, unique patient profiles and needs, and recognition that the drugs themselves are sometimes less of a problem than their abuse.

Researchers in social science, medicine, or pharmacotherapy may find this evolving story to be a good read despite its limitations. However, women transiting menopause may find it confusing. A more scholarly review of the current status of postmenopausal hormone therapy is to be found in The hormone decision (1) by Tara Parker-Pope, former health columnist for the Wall Street Journal, now with The New York Times. In particular, the scientific studies are far more critically analyzed. For those with a serious interest in the subject, reading both books will provide the best perspective.