Production of ROS by microglial Nox2 during inflammation is amplified by mutant SOD1 binding to Rac1 in ALS. 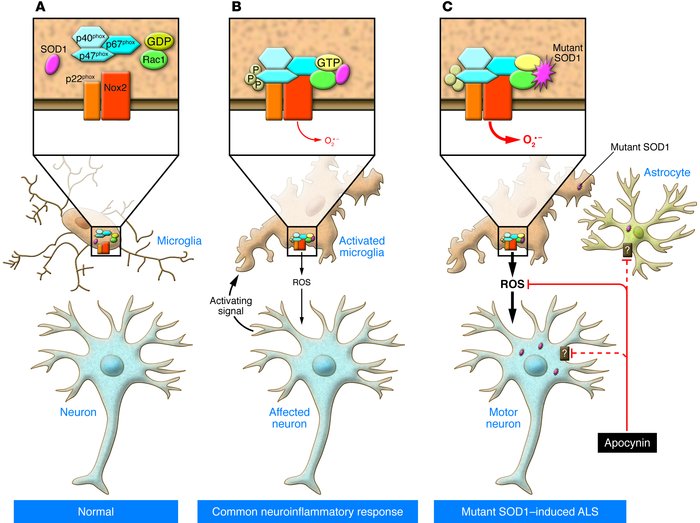 () Under normal conditions, cytosolic activators p67phox, p47phox, and p40phox of the microglial Nox catalytic subunit Nox2 are not bound to Nox2, and Rac1 is linked to GDP. () Upon microglial activation, including following a stimulus generated from degenerating neurons, Nox is activated and the p47phox subunit becomes phosphorylated and translocates the p67phox/p47phox/p40phox complex to the membrane. The new report in this issue from Harraz and colleagues () shows that SOD1 stabilizes the Nox2 activator Rac1-GTP. The activated Nox complex produces O2•– and ROS derived from O2•–, which can in turn damage neurons. () In the case of mutant SOD1–induced ALS, Harraz and colleagues show that mutant SOD1 keeps Rac1 in its active GTP-bound form and increases the production of ROS by microglial cells. The drug apocynin blocks microglial production of ROS by inhibiting Nox2 and could potentially block other forms of Nox in additional cell types, including neurons and astrocytes.