Retroviral vector–mediated HSC gene therapy has been used to treat individuals with a number of life-threatening diseases. However, some patients with SCID-X1 developed retroviral vector–mediated leukemia after treatment. The selective growth advantage of gene-modified cells in patients with SCID-X1 suggests that the transgene may have played a role in leukemogenesis. Here we report that 2 of 2 dogs and 1 of 2 macaques developed myeloid leukemia approximately 2 years after being transplanted with cells that overexpressed homeobox B4 (HOXB4) and cells transduced with a control gammaretroviral vector that did not express HOXB4. The leukemic cells had dysregulated expression of oncogenes, a block in myeloid differentiation, and overexpression of HOXB4. HOXB4 knockdown restored differentiation in leukemic cells, suggesting involvement of HOXB4. In contrast, leukemia did not arise from the cells carrying the control gammaretroviral vector. In addition, leukemia did not arise in 5 animals with high-level marking and polyclonal long-term repopulation following transplantation with cells transduced with an identical gammaretrovirus vector backbone expressing methylguanine methyltransferase. These findings, combined with the absence of leukemia in many other large animals transplanted with cells transduced with gammaretroviral vectors expressing genes other than HOXB4, show that HOXB4 overexpression poses a significant risk of leukemogenesis. Our data thus suggest the continued need for caution in genetic manipulation of repopulating cells, particularly when the transgene might impart an intrinsic growth advantage. 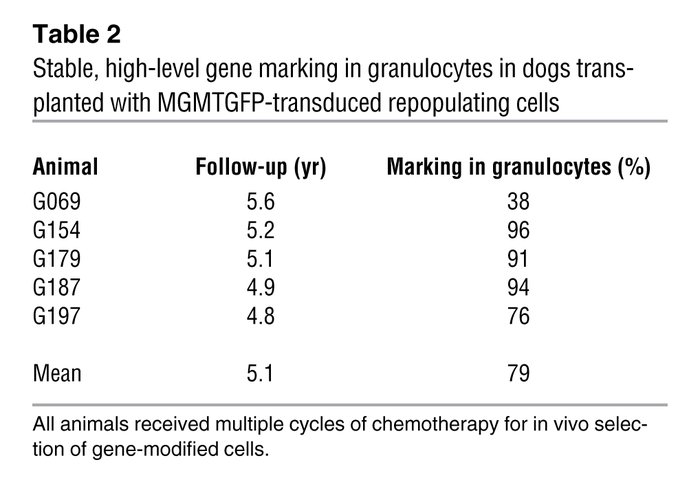