Tau pathology is a hallmark of many neurodegenerative diseases including Alzheimer disease (AD) and frontotemporal dementia with Parkinsonism linked to chromosome 17 (FTDP-17). Genetic tau mutations can cause FTDP-17, and mice overexpressing tau mutants such as P301L tau are used as AD models. However, since no tau mutations are found in AD, it remains unclear how appropriate tau mutant mice are as an AD model. The prolyl isomerase Pin1 binds and isomerizes tau and has been implicated in protecting against neurodegeneration, but whether such Pin1 regulation is affected by tau mutations is unknown. Consistent with earlier findings that Pin1 KO induces tauopathy, here we demonstrate that Pin1 knockdown or KO increased WT tau protein stability in vitro and in mice and that Pin1 overexpression suppressed the tauopathy phenotype in WT tau transgenic mice. Unexpectedly, Pin1 knockdown or KO decreased P301L tau protein stability and abolished its robust tauopathy phenotype in mice. In contrast, Pin1 overexpression exacerbated the tauopathy phenotype in P301L tau mice. Thus, Pin1 has opposite effects on the tauopathy phenotype depending on whether the tau is WT or a P301L mutant, indicating the need for disease-specific therapies for tauopathies.

Pin1 KD in cells has opposite effects on the protein stability of WT tau and P301L tau; these effects depend on the presence of the Pin1-binding site in tau proteins. 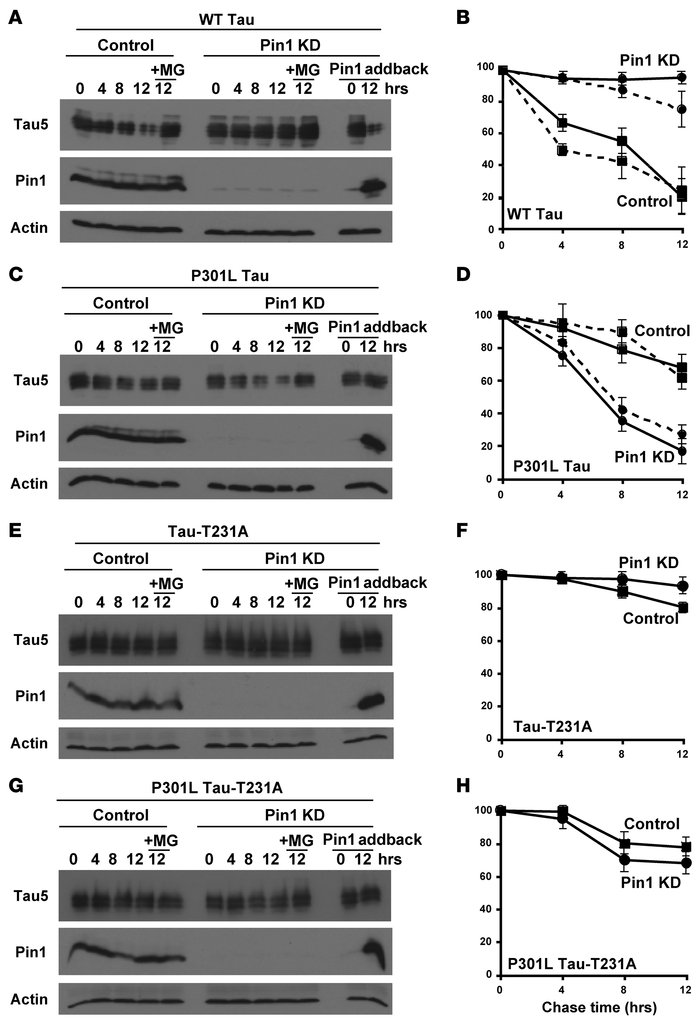