Prolonged activation of p70 S6 kinase (S6K) by insulin and nutrients leads to inhibition of insulin signaling via negative feedback input to the signaling factor IRS-1. Systemic deletion of S6K protects against diet-induced obesity and enhances insulin sensitivity in mice. Herein, we present evidence suggesting that hypothalamic S6K activation is involved in the pathogenesis of diet-induced hepatic insulin resistance. Extending previous findings that insulin suppresses hepatic glucose production (HGP) partly via its effect in the hypothalamus, we report that this effect was blunted by short-term high-fat diet (HFD) feeding, with concomitant suppression of insulin signaling and activation of S6K in the mediobasal hypothalamus (MBH). Constitutive activation of S6K in the MBH mimicked the effect of the HFD in normal chow–fed animals, while suppression of S6K by overexpression of dominant-negative S6K or dominant-negative raptor in the MBH restored the ability of MBH insulin to suppress HGP after HFD feeding. These results suggest that activation of hypothalamic S6K contributes to hepatic insulin resistance in response to short-term nutrient excess. 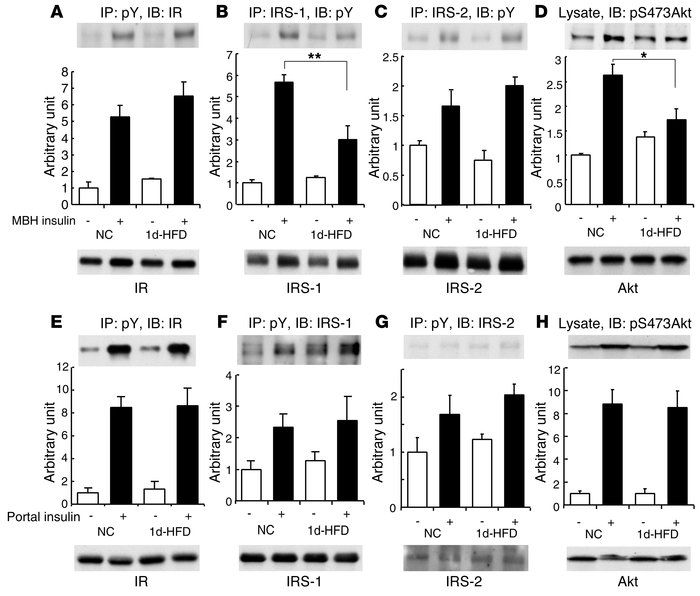 Rats were fed NC or HFD for 1 d. Insulin was infused into the MBH (4 μU) or the portal vein (1 U/kg), and 15 min or 3 min later, respectively, MBH (–) or the liver (–) was harvested and analyzed. Tyrosine phosphorylations of IR ( and ), IRS-1 ( and ), and IRS-2 ( and ) were studied by immunoprecipitation with anti-phosphotyrosine (pY) antibody and blotted with anti-IR ( and ), anti–IRS-1 (), anti–IRS-2 (), or immunoprecipitation with anti–IRS-1 () or anti–IRS-2 () antibodies and blotting with anti-phosphotyrosine antibody. ( and ) Tissue lysates were blotted with anti-pSer473 Akt antibody. Graphs show the ratio of phosphoproteins to total proteins. * < 0.05; ** < 0.01.