Calpains are calcium-dependent enzymes that determine the fate of proteins through regulated proteolytic activity. Calpains have been linked to the modulation of memory and are key to the pathogenesis of Alzheimer disease (AD). When abnormally activated, calpains can also initiate degradation of proteins essential for neuronal survival. Here we show that calpain inhibition through E64, a cysteine protease inhibitor, and the highly specific calpain inhibitor BDA-410 restored normal synaptic function both in hippocampal cultures and in hippocampal slices from the APP/PS1 mouse, an animal model of AD. Calpain inhibition also improved spatial-working memory and associative fear memory in APP/PS1 mice. These beneficial effects of the calpain inhibitors were associated with restoration of normal phosphorylation levels of the transcription factor CREB and involved redistribution of the synaptic protein synapsin I. Thus, calpain inhibition may prove useful in the alleviation of memory loss in AD.

Calpain inhibition reestablished the increase in CREB phosphorylation during synaptic plasticity in APP/PS1 mice and produced a normal distribution of the synaptic protein synapsin I. 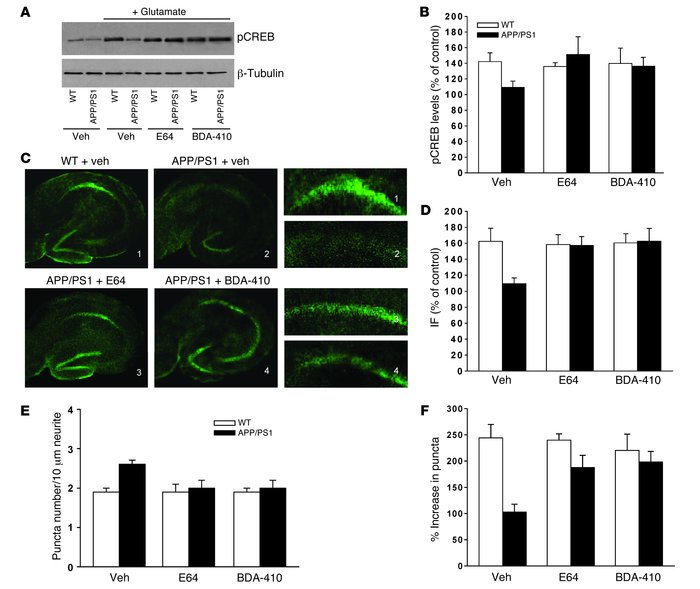