HIV infiltrates the CNS soon after an individual has become infected with the virus, and can cause dementia and encephalitis in late-stage disease. Here, a global metabolomics approach was used to find and identify metabolites differentially regulated in the cerebrospinal fluid (CSF) of rhesus macaques with SIV-induced CNS disease, as we hypothesized that this might provide biomarkers of virus-induced CNS damage. The screening platform used a non-targeted, mass-based metabolomics approach beginning with capillary reverse phase chromatography and electrospray ionization with accurate mass determination, followed by novel, nonlinear data alignment and online database screening to identify metabolites. CSF was compared before and after viral infection. Significant changes in the metabolome specific to SIV-induced encephalitis were observed. Metabolites that were increased during infection-induced encephalitis included carnitine, acyl-carnitines, fatty acids, and phospholipid molecules. The elevation in free fatty acids and lysophospholipids correlated with increased expression of specific phospholipases in the brains of animals with encephalitis. One of these, a phospholipase A2 isoenzyme, is capable of releasing a number of the fatty acids identified. It was expressed in different areas of the brain in conjunction with glial activation, rather than linked to regions of SIV infection and inflammation, indicating widespread alterations in infected brains. The identification of specific metabolites as well as mechanisms of their increase illustrates the potential of mass-based metabolomics to address problems in CNS biochemistry and neurovirology, as well as neurodegenerative diseases. 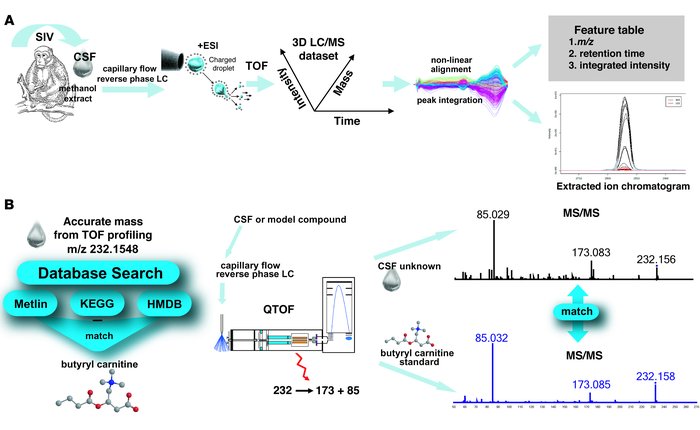 () Metabolomics profiling. Rhesus macaques were infected with SIV, and CSF was collected before and during the course of infection. Metabolites from CSF were extracted with methanol and applied to a capillary reverse-phase column at 4 μl/min. Electrospray ionization in positive mode was used, with TOF data collected from 100 to 1,000 . Each sample produced a 3-dimensional data set. Automatic peak finding, followed by nonlinear alignment in the time domain and peak integration, was performed using the XCMS program. A feature table was produced consisting of , retention time, and integrated intensity for each sample. An extracted ion chromatogram was automatically generated for each feature. ESI, electrospray ionization. () Identification of metabolites. Accurate mass data from metabolites of interest were obtained from the TOF data collected in the profiling experiment. Masses were searched against databases of known metabolites, such as METLIN, KEGG, and HMDB. A match provided a hypothetical identity, which was tested by obtaining fragmentation data using a QTOF instrument. The LC conditions were duplicated on the QTOF, and the CSF and model compounds were run under identical conditions, targeting the mass–retention time pair obtained from the profiling experiment. The MS/MS spectra of the unknown and model compound were compared to determine whether the 2 spectra matched. The accurate mass data, in combination with MS/MS data provided confirmation that the identity of the metabolite was correct. Numbers are values.