Hereditary sensory and autonomic neuropathy type II (HSANII) is an early-onset autosomal recessive disorder characterized by loss of perception to pain, touch, and heat due to a loss of peripheral sensory nerves. Mutations in hereditary sensory neuropathy type II (HSN2), a single-exon ORF originally identified in affected families in Quebec and Newfoundland, Canada, were found to cause HSANII. We report here that HSN2 is a nervous system–specific exon of the with-no-lysine(K)–1 (WNK1) gene. WNK1 mutations have previously been reported to cause pseudohypoaldosteronism type II but have not been studied in the nervous system. Given the high degree of conservation of WNK1 between mice and humans, we characterized the structure and expression patterns of this isoform in mice. Immunodetections indicated that this Wnk1/Hsn2 isoform was expressed in sensory components of the peripheral nervous system and CNS associated with relaying sensory and nociceptive signals, including satellite cells, Schwann cells, and sensory neurons. We also demonstrate that the novel protein product of Wnk1/Hsn2 was more abundant in sensory neurons than motor neurons. The characteristics of WNK1/HSN2 point to a possible role for this gene in the peripheral sensory perception deficits characterizing HSANII. 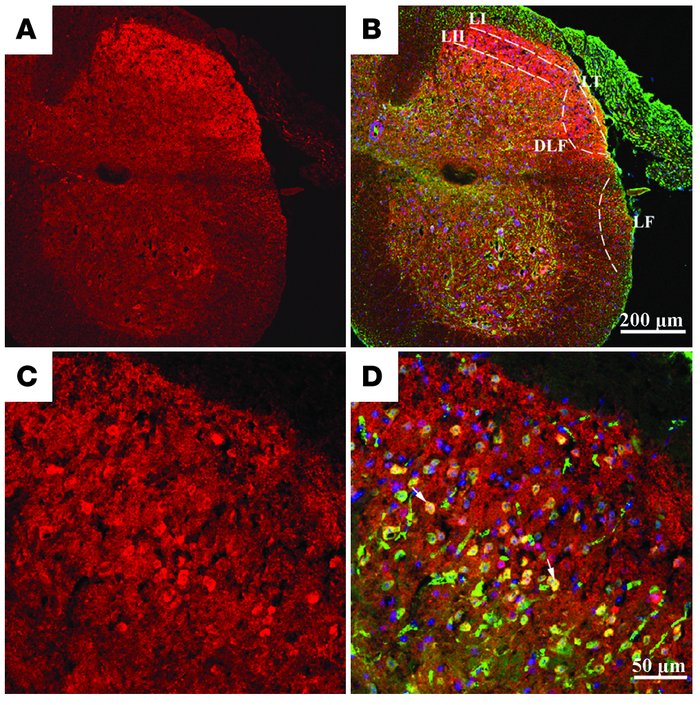 () Low-magnification image of immunohistochemistry detections of adult mouse spinal cord cross section with anti-HSN2 antiserum. The anti-HSN2 antiserum gave a strong signal (red) in the superficial layers (LI and LII) of the dorsal horn, the dorsolateral funiculus (DLF), the lateral funiculus (LF), and the Lissauer tract (LT). () Overlaid images of the HSN2 signal (red in ), the signal from the anti–SMI-31/32 axonal marker (green), and the nuclear fluorescent labeling (blue). () Immunodetection of LI and LII with anti-HSN2 (red). () Overlaid images of the detection of HSN2 (red in ), NeuN (green), and the nuclear labeling (blue). Arrows indicate neurons where the colocalization is observed, confirming the presence of HSN2 protein in cells of this region.