Phenotypic overlap of type 3 long QT syndrome (LQT3) with Brugada syndrome (BrS) is observed in some carriers of mutations in the Na channel SCN5A. While this overlap is important for patient management, the clinical features, prevalence, and mechanisms underlying such overlap have not been fully elucidated. To investigate the basis for this overlap, we genotyped a cohort of 44 LQT3 families of multiple ethnicities from 7 referral centers and found a high prevalence of the E1784K mutation in SCN5A. Of 41 E1784K carriers, 93% had LQT3, 22% had BrS, and 39% had sinus node dysfunction. Heterologously expressed E1784K channels showed a 15.0-mV negative shift in the voltage dependence of Na channel inactivation and a 7.5-fold increase in flecainide affinity for resting-state channels, properties also seen with other LQT3 mutations associated with a mixed clinical phenotype. Furthermore, these properties were absent in Na channels harboring the T1304M mutation, which is associated with LQT3 without a mixed clinical phenotype. These results suggest that a negative shift of steady-state Na channel inactivation and enhanced tonic block by class IC drugs represent common biophysical mechanisms underlying the phenotypic overlap of LQT3 and BrS and further indicate that class IC drugs should be avoided in patients with Na channels displaying these behaviors. 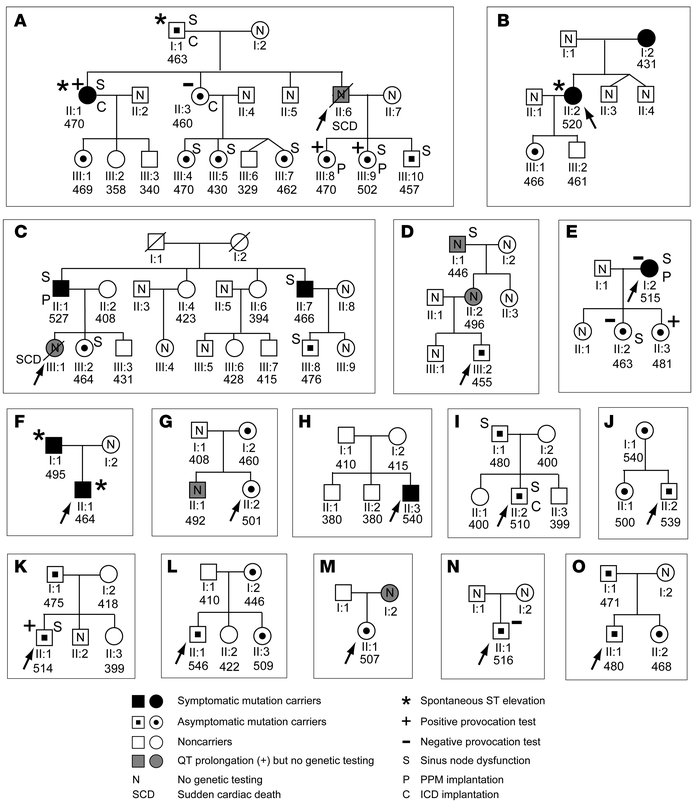 Pedigrees of 15 LQT3 families (pedigrees A–O shown in panels –, respectively) carrying E1784K are shown. The pedigree C was previously reported elsewhere (). Probands are indicated by an arrow. Nine symptomatic mutation carriers, shown by the filled symbols, had episodes of syncope ( = 8) and unexplained palpitations ( = 1; B;II:2). Asymptomatic mutation carriers ( = 32) are shown as symbols with a dot, and gray symbols are the individuals with QT prolongation who declined genetic testing, or are sudden cardiac death victims (SCD; A;II:6 and C;III:1) whose DNA was not available. Individuals exhibiting ST elevation in the right precordial leads are depicted with an asterisk. N represents individuals genetically undetermined. S, P, and C represent individuals who had sinus node dysfunction ( = 16), permanent pacemaker implantation (PPM; = 4), and an implantable cardioverter defibrillator (ICD; = 4), respectively. Values for QTc intervals are given beneath each symbol. The Na channel provocation test was positive in individuals with + (A;II:1, A;III:8, A;III:9, E;II:3, and K;II:1), and negative in the individuals with – (A;II:3, E;I:2, E;II:2, and N;II:1). In family G, V1098L was identified in II:2 (who also had E1784K) but not in I:2 (an E1784K carrier), showing that II:2 was a compound mutation carrier. In family H, parents of the proband were both genetically unaffected, indicating that E1784K in the proband was most likely a de novo mutation. Three asymptomatic family members with a prolonged QTc (D;I:1, D;II:2, and G;II:1) declined genetic testing, and 1 individual, D;I:1, exhibited sinus node dysfunction. Squares and circles indicate men and women, respectively.