Numerous studies have suggested that muscle atrophy is accompanied by apoptotic loss of myonuclei and therefore recovery would require replenishment by muscle stem cells. We used in vivo time-lapse microscopy to observe the loss and replenishment of myonuclei in murine muscle fibers following induced muscle atrophy. To our surprise, imaging of single fibers for up to 28 days did not support the concept of nuclear loss during atrophy. Muscles were inactivated by denervation, nerve impulse block, or mechanical unloading. Nuclei were stained in vivo either acutely by intracellular injection of fluorescent oligonucleotides or in time-lapse studies after transfection with a plasmid encoding GFP with a nuclear localization signal. We observed no loss of myonuclei in fast- or slow-twitch muscle fibers despite a greater than 50% reduction in fiber cross-sectional area. TUNEL labeling of fragmented DNA on histological sections revealed high levels of apoptotic nuclei in inactive muscles. However, when costained for laminin and dystrophin, virtually none of the TUNEL-positive nuclei could be classified as myonuclei; apoptosis was confined to stromal and satellite cells. We conclude that disuse atrophy is not a degenerative process, but is rather a change in the balance between protein synthesis and proteolysis in a permanent cell syncytium.

Time-lapse study of nuclei and atrophy in single muscle fibers in the EDL muscle after denervation. 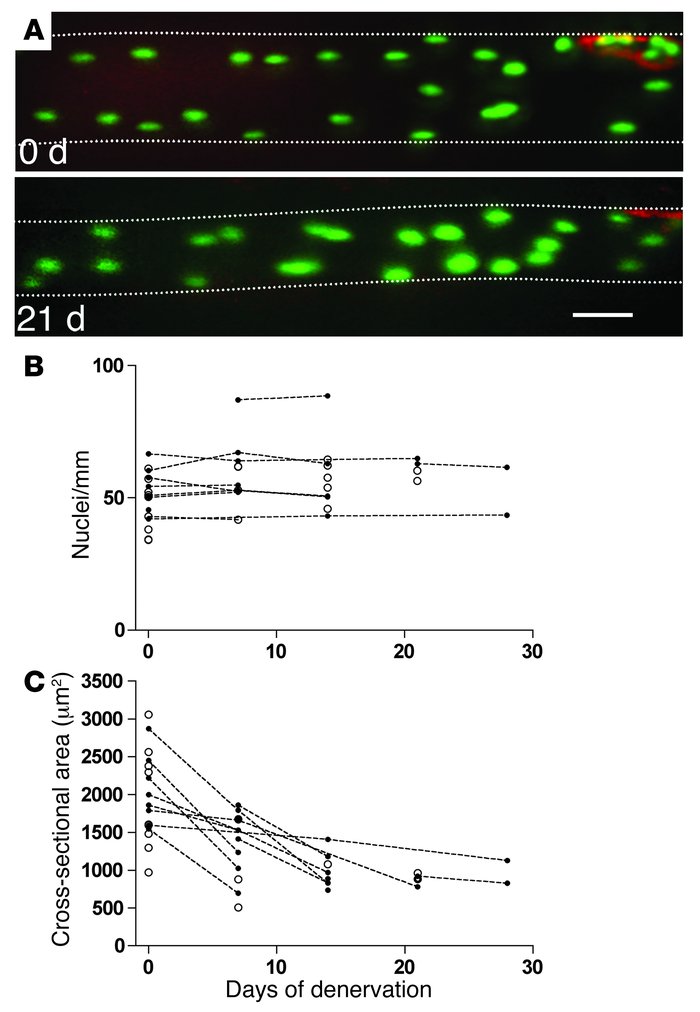 () Images of a representative muscle fiber after injection of an expression vector encoding nucEGFP (green) showing the same fiber observed at the time of denervation and again after 21 days. The neuromuscular endplate was stained by α-bungarotoxin (red). At both time points, 21 nuclei can be identified within the picture frame. Background staining of EGFP or fluorescent nucleotides in the cytosol made the fiber outline discernible, and an estimated cross-sectional area was calculated from the apparent diameter. The fiber boundaries are outlined for clarity. For the 2-dimensional illustrations presented in the figures, the image stacks were merged by the Project Z command in NIH ImageJ. Some out-of-focus information was removed from some of the planes, and different degrees of contrast enhancement were used in different parts of the final image to compensate for spatial differences in camera sensitivity and in staining intensity due to variable diffusion distances from the point of injection. Scale bar: 50 μm. () Summary of nuclei counts performed on picture stacks of fiber segments. Data representing multiple observations from the same fiber are indicated by filled symbols connected with broken lines. Single time-point observations of other fibers are indicated with open symbols. () For the same fibers as shown in , cross-sectional area (CSA) was estimated by measuring the fiber diameter on micrographs.