Cytochrome P450 3A (CYP3A) enzymes constitute an important detoxification system that contributes to primary metabolism of more than half of all prescribed medications. To investigate the physiological and pharmacological roles of CYP3A, we generated Cyp3a-knockout (Cyp3a–/–) mice lacking all functional Cyp3a genes. Cyp3a–/– mice were viable, fertile, and without marked physiological abnormalities. However, these mice exhibited severely impaired detoxification capacity when exposed to the chemotherapeutic agent docetaxel, displaying higher exposure levels in response to both oral and intravenous administration. These mice also demonstrated increased sensitivity to docetaxel toxicity, suggesting a primary role for Cyp3a in xenobiotic detoxification. To determine the relative importance of intestinal versus hepatic Cyp3a in first-pass metabolism, we generated transgenic Cyp3a–/– mice expressing human CYP3A4 in either the intestine or the liver. Expression of CYP3A4 in the intestine dramatically decreased absorption of docetaxel into the bloodstream, while hepatic expression aided systemic docetaxel clearance. These results suggest that CYP3A expression determines impairment of drug absorption and efficient systemic clearance in a tissue-specific manner. The genetic models used in this study provide powerful tools to further study CYP3A-mediated xenobiotic metabolism, as well as interactions between CYP3A and other detoxification systems. 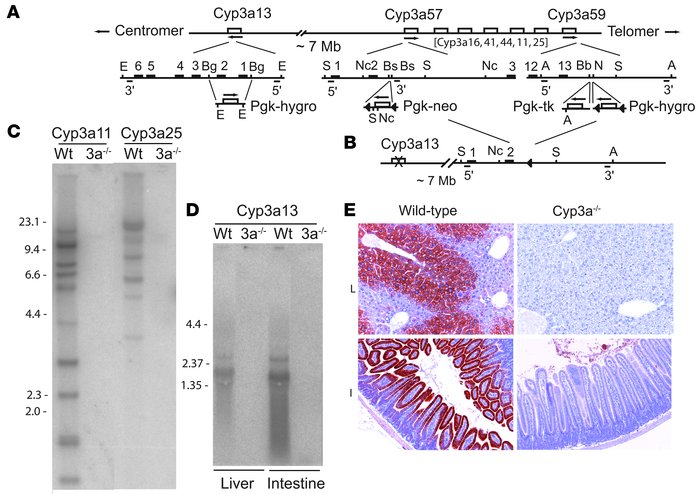 () For disruption of , a 4-kb domain including exons 1 and 2 and the putative promoter region was replaced with an inverted hygromycin cassette. Between exons 2 and 3 of an inverted neomycin cassette with sequences was inserted and an inverted –thymidine kinase and an inverted hygromycin cassette with sequences was inserted 2.2 kb downstream of exon 13 of . The genes within the cluster were excised from the genome by - recombinase transfection. pseudogenes are not shown. () Structure of the region after deletion of the Cyp3a cluster and disruption. For Southern blot analysis, 5′ and 3′ probes were used on digested genomic DNA. Triangles indicate sequences, numbered boxes indicate exons, arrows indicate transcriptional orientation. E, EcoRV; Bg, BglII; S, ScaI; Nc, NcoI; Bs, BstEII; A, Asp718; Bb, Bbrp1; N, NheI. () Southern blot analysis of kidney DNA digested with Asp718 from Cyp3a–/– (3a–/–) mice and probed with or cDNA, demonstrating the absence of all Cyp3a cluster genes. () Northern blot analysis for liver and intestinal RNA probed with cDNA, demonstrating the absence of RNA in Cyp3a–/– mice. () Immunohistochemical detection of Cyp3a in liver (L) and small intestine (I) of wild-type but not Cyp3a–/– mice.