Primary ciliary dyskinesia (PCD) is a genetically heterogeneous disorder associated with ciliary defects and situs inversus totalis, the complete mirror image reversal of internal organ situs (positioning). A variable incidence of heterotaxy, or irregular organ situs, also has been reported in PCD patients, but it is not known whether this is elicited by the PCD-causing genetic lesion. We studied a mouse model of PCD with a recessive mutation in Dnahc5, a dynein gene commonly mutated in PCD. Analysis of homozygous mutant embryos from 18 litters yielded 25% with normal organ situs, 35% with situs inversus totalis, and 40% with heterotaxy. Embryos with heterotaxy had complex structural heart defects that included discordant atrioventricular and ventricular outflow situs and atrial/pulmonary isomerisms. Variable combinations of a distinct set of cardiovascular anomalies were observed, including superior-inferior ventricles, great artery alignment defects, and interrupted inferior vena cava with azygos continuation. The surprisingly high incidence of heterotaxy led us to evaluate the diagnosis of PCD. PCD was confirmed by EM, which revealed missing outer dynein arms in the respiratory cilia. Ciliary dyskinesia was observed by videomicroscopy. These findings show that Dnahc5 is required for the specification of left-right asymmetry and suggest that the PCD-causing Dnahc5 mutation may also be associated with heterotaxy. 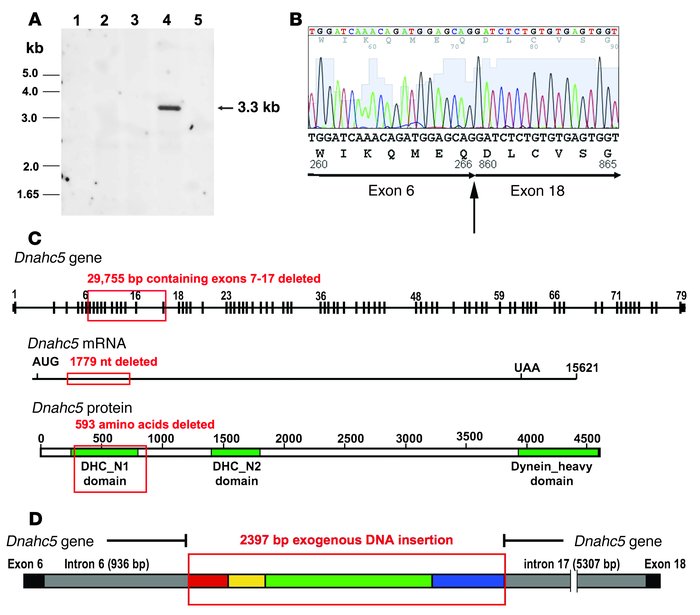