In this issue of the JCI, Nissen et al. report that a reciprocal interaction exists between the growth factors FGF2 and PDGF-BB, causing tumors to exhibit increased angiogenesis and metastatic potential (see the related article beginning on page 2766). Both FGF2 and PDGF-BB signal through tyrosine kinase receptors, which have been the target of tyrosine kinase inhibitors for cancer therapies. These inhibitors are usually small molecules that inhibit the kinase activity of a receptor or nonreceptor tyrosine kinase, preventing downstream signaling. The results of this study shed light on why tyrosine kinase inhibitors have been useful for the treatment of only a small number of advanced cancers. Currently, a major focus of pharmaceutical companies is to develop ever more potent and specific tyrosine kinases. The results presented here suggest that this approach may not be successful.

Coexpression of FGF2 and PDGF-BB results in activation of nonredundant signaling pathways in advanced solid tumors (). 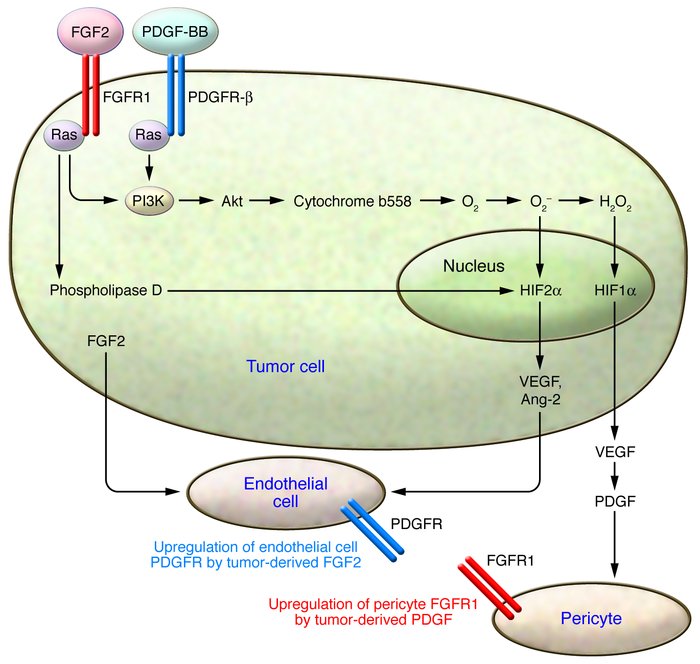 FGF2 and PDGF-BB both activate tyrosine kinase receptors (FGFR1 and PDGFR-β, respectively) that in turn activate PI3K signaling, yet differ in their downstream consequences. PDGF-BB is a well-known stimulator of Akt, which can activate reactive oxygen species (superoxide [O2–] and hydrogen peroxide [H2O2]) through induction of cytochrome b558 genes, resulting in the induction of HIF1α and HIF2α and eventually VEGF, a potent endothelial cell chemoattractant, and Ang-2, which likely mediates a repulsive effect that prevents pericyte–endothelial cell stabilization of neoangiogenic vessels. FGF2 is a potent activator of phospholipase D, that acts as an alternative survival factor to Akt. Blockade of PDGF by a specific tyrosine kinase inhibitor may promote FGF2 signaling, while blockade of FGF2 signaling may promote PDGF-BB–mediated signaling. Blockade of both FGF2 and PDGF-BB with a promiscuous tyrosine kinase inhibitor or other dirty compound may be more effective than targeted tyrosine kinase inhibitor monotherapy in blocking tumor growth.