The mechanisms underlying the susceptibility of individuals with caspase recruitment domain 15 (CARD15) mutations and corresponding abnormalities of nucleotide-binding oligomerization domain 2 (NOD2) protein to Crohn disease are still poorly understood. One possibility is based on previous studies showing that muramyl dipeptide (MDP) activation of NOD2 negatively regulates TLR2 responses and that absence of such regulation leads to heightened Th1 responses. We now report that administration of MDP protects mice from the development of experimental colitis by downregulating multiple TLR responses, not just TLR2. The basis of these in vivo findings was suggested by in vitro studies of DCs, in which we showed that prestimulation of cells with MDP reduces cytokine responses to multiple TLR ligands and this reduction is dependent on enhanced IFN regulatory factor 4 (IRF4) activity. Further studies of mouse models of colitis showed that this inhibitory role of IRF4 does in fact apply to MDP-mediated protection from colitis, since neither IRF4-deficient mice nor mice treated with siRNA specific for IRF4 were protected. These findings indicate that MDP activation of NOD2 regulates innate responses to intestinal microflora by downregulating multiple TLR responses and suggest that the absence of such regulation leads to increased susceptibility to Crohn disease. 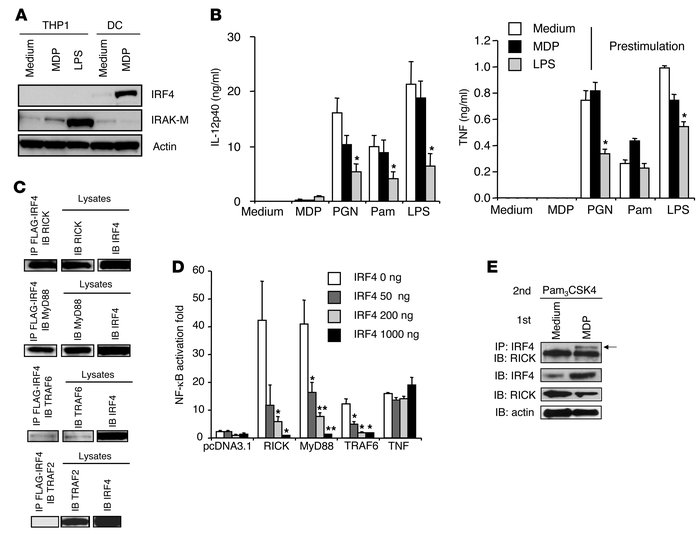 () Whole-cell extracts were prepared from THP1 cells stimulated with MDP or LPS for 24 hours and then immunoblotted with Abs against IRF4, IRAK-M, and actin. () THP1 cells (5 × 105/ml) were prestimulated with MDP, LPS, or medium for 24 hours and stimulated with TLR ligands; cultured supernatants were collected at 24 hours and analyzed for cytokine production by ELISA. * < 0.05 compared with the concentrations of cytokines by cells preincubated with medium and stimulated with TLR ligands (white bars). () Physical interactions between IRF4 and RICK, MyD88, and TRAF6. Whole-cell extracts of HEK293 cells transfected with vectors (2 μg) expressing FLAG-tagged human IRF4 and HA-tagged human MyD88 or with untagged RICK, TRAF6, or TRAF2 were immunoprecipitated with anti-FLAG–conjugated beads and then immunoblotted with anti-HA Abs or with anti-RICK, -TRAF6, or -TRAF2. () Negative regulation of NF-κB by IRF4. HT-29 cells (1 × 105/96-well plate) transfected with pNF-κB–Luc (50 ng) and pSV–β-galactosidase (10 ng) were cotransfected with vectors expressing human RICK (200 ng), human MyD88 (200 ng), or human TRAF6 (200 ng) with or without an IRF4-expressing vector (50 ng, 200 ng, 1000 ng). * < 0.05; ** < 0.01 compared with cells without IRF4 transfection (white bars). () Physical interaction of IRF4 and RICK in MDP-prestimulated human DCs. DCs were cultured with MDP or medium for 24 hours and then stimulated with Pam3CSK4 for an additional hour; whole-cell extracts were prepared and then immunoprecipitated with anti-IRF4 Abs and immunoblotted with anti-RICK Abs.