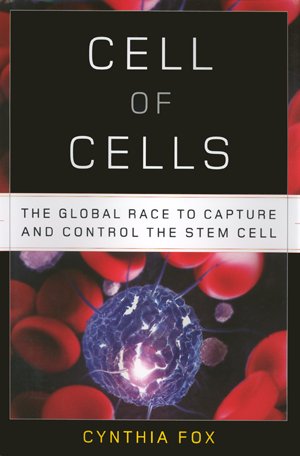 Human embryonic stem (hES) cell research, a burgeoning area of medical inquiry, has been lauded by scientists, patient advocates, and members of the general public for its potential to cure many of today’s most dreaded diseases. Cynthia Fox’s Cell of cells: the global race to capture and control the stem cell presents the travails of stem cell researchers the world round and the vicissitudes of the patients who depend on them. It is a travelogue that provides the background of the work, people, and places involved in what is an exciting race to be first to realize the promise of stem cell research. It is a well-written book with material for the casual reader wanting to know more about the subject as well as for those with a greater familiarity with the topic who prefer more scientific detail.

The book provides an overview of the science and politics surrounding this topic. Since hES cell research requires the destruction of human embryos, it has divided the religious conservative and scientific communities. Scientists see the potential to treat many life-threatening diseases while conservatives argue that these cells are still the foundations of human life and therefore have a right to life. Right-to-life supporters have been able to politicize this issue and hence place restrictions on stem cell research in America that will likely result in America falling behind in this scientific area.

The key attribute of hES cells that makes them critical weapons in the fight against debilitating diseases is their ability to regenerate any and all of the body’s myriad cells and tissues. From alleviating common ailments such as rheumatoid arthritis to treating feared killers, including cancer, stroke, and heart disease, stem cells have the potential to restore wellness.

The reader travels around the world as Fox reports on the international race to use stem cells successfully — illustrating mundane problems such as sand in Petri dishes in the Sahara and describing an Israeli lab that narrowly escaped a terrorist bomb. Fox also demonstrates the often cooperative nature of this area of research, even when the scientists involved hold different and opposing religious and political beliefs.

In her writing, Fox adds a human dimension to the topic of stem cells. While she covers the scientific aspects of stem cell research, she also depicts the people involved, their lives and hopes and struggles. They live in different societies, in different environments. One of the most eye-opening sections of the book, titled “Biopolis,” describes research in Singapore, where some of the world’s most talented scientists have been recruited to work in state-of-the-art laboratories. Singapore has reportedly spent $1.5 billion on national stem cell research initiatives. It is easy to feel the passion that this scientific race engenders.

Fox also makes the subject of stem cell research exciting through her descriptions of the efforts to condition a patient so that a donor organ will be accepted rather than rejected. She reviews the status of cloning and how its useful applications are expanding.

The author also addresses the rise and fall of Woo-Suk Hwang, the South Korean researcher who claimed astonishing advances in stem cell research with his publications in major scientific journals. His career came to an abrupt end when it was made public that he had fabricated many of his results and had breached ethical guidelines when he paid women to donate their eggs for research.

Fox proves to be a good storyteller. The book is filled with narratives that serve to increase the reader’s interest in science. Fox keeps the scientific facts and jargon to a minimum yet still gives the reader relevant information. Her pictorial descriptions of foreign settings are wonderful. Fox paints extremely vivid (at times a bit too graphic) images of places and people, and the stories are often suspenseful. She attempts to provide a plethora of lab findings; however, peer-reviewed scientific research is reported alongside limited commentaries and rhetoric that have not yet been critiqued via traditional channels by the conventional scientific community.

Unfortunately, Cell of cells does not add much that is new. However, it makes one think about the immense possibility science holds for society. It tells a great story, one that unfortunately has not yet ended with success. But the struggle is important; it makes scientific research exciting. Aspiring students of science would benefit from this book, both as stimulation and as an example of the kinds of approaches undertaken in this particular scientific endeavor. The restrictions placed on hES cell research by religious groups will only delay success (assuming that there will be success at the end of this road). Fox’s book is an excellent introduction to the field of stem cell research and makes for interesting and entertaining reading.