Clinical and experimental evidence indicates that intestinal inflammatory conditions can be exacerbated by behavioral conditions such as depression. The recent demonstration of a tonic counterinflammatory influence mediated by the vagus nerve in experimental colitis provides a potential link between behavior and gut inflammation. Here we show that experimental conditions that induced depressive-like behaviors in mice increased susceptibility to intestinal inflammation by interfering with the tonic vagal inhibition of proinflammatory macrophages and that tricyclic antidepressants restored vagal function and reduced intestinal inflammation. These results show that reserpine-induced monoamine depletion and maternal separation, 2 models for depression, produced a vulnerability to colitis by a mechanism involving parasympathetic transmission and the presence of gut macrophages. The tricyclic antidepressant desmethylimipramine protected against this vulnerability by a vagal-dependent mechanism. Together these results illustrate the critical role of the vagus in both the vulnerability to inflammation induced by depressive-like conditions and the protection afforded by tricyclic antidepressants and rationalize a clinical evaluation of both parasympathomimetics and tricyclic antidepressants in treatment of inflammatory bowel disease.

Influence of nicotine treatment on experimental depression and VXP. 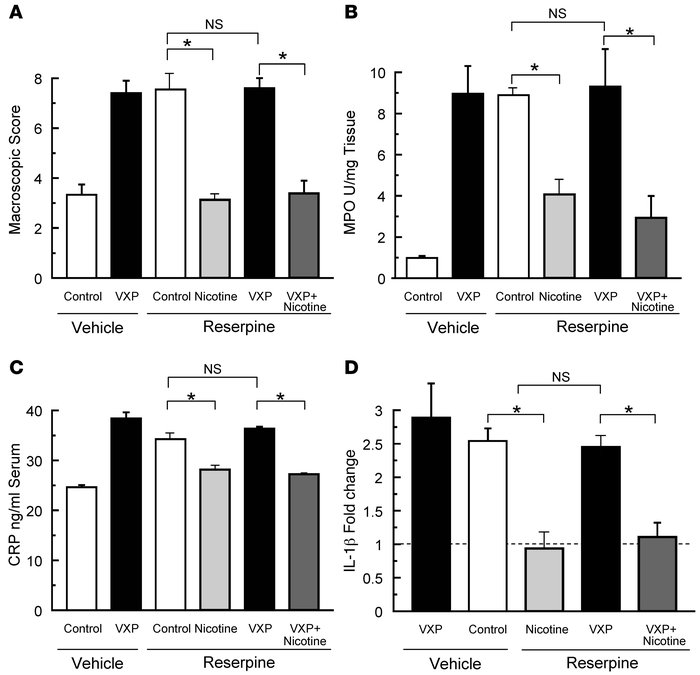 Influence of 10 days of nicotine (20 μg/ml in drinking water) treatments, starting 4 days after the beginning of reserpine (1 μg/d) treatment, on () macroscopic score, () MPO activity, () CRP levels, and () IL-1β cytokine levels in colonic tissue after 5 days DSS-induced colitis on RM (1 μg/d for 14 days) and nonreserpinized mice. Fold change compared with DSS 5% nonreserpinized mice. In presence or in absence of VXP, nicotine treatment significantly decreased all 4 markers. * < 0.05, ≥ 8. The values are shown as means ± SEM.