Severe pain syndromes reduce quality of life in patients with inflammatory and neoplastic diseases, often because chronic opiate therapy results in reduced analgesic effectiveness, or tolerance, leading to escalating doses and distressing side effects. The mechanisms leading to tolerance are poorly understood. Our studies revealed that development of antinociceptive tolerance to repeated doses of morphine in mice was consistently associated with the appearance of several tyrosine-nitrated proteins in the dorsal horn of the spinal cord, including the mitochondrial isoform of superoxide (O2–) dismutase, the glutamate transporter GLT-1, and the enzyme glutamine synthase. Furthermore, antinociceptive tolerance was associated with increased formation of several proinflammatory cytokines, oxidative DNA damage, and activation of the nuclear factor poly(ADP-ribose) polymerase. Inhibition of NO synthesis or removal of O2– blocked these biochemical changes and inhibited the development of tolerance, pointing to peroxynitrite (ONOO–), the product of the interaction between O2– and NO, as a signaling mediator in this setting. Indeed, coadministration of morphine with the ONOO– decomposition catalyst, Fe(III) 5,10,15,20-tetrakis(N-methylpyridinium-4-yl)porphyrin, blocked protein nitration, attenuated the observed biochemical changes, and prevented the development of tolerance in a dose-dependent manner. Collectively, these data suggest a causal role for ONOO– in pathways culminating in antinociceptive tolerance to opiates. Peroxynitrite (ONOO–) decomposition catalysts may have therapeutic potential as adjuncts to opiates in relieving suffering from chronic pain.

Illustration summarizing the key findings of this study depicting the role(s) of ONOO– in the development of morphine-induced antinociceptive tolerance. 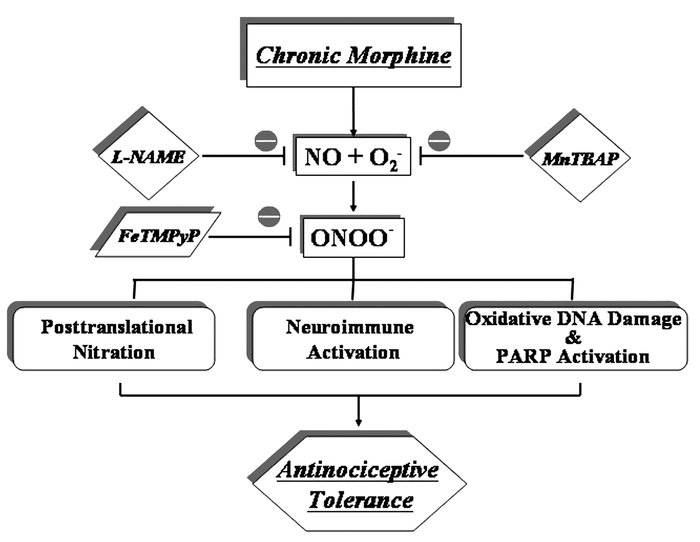 Formation of ONOO– in the spinal cord during repeated administration of morphine plays a critical role in the development of morphine-induced antinociceptive tolerance through at least 3 biochemical pathways: posttranslational nitration, neuroimmune activation, and release of proinflammatory cytokines, and oxidative DNA damage and PARP activation. Inhibition of its formation by removal of NO and O2– or by catalytically decomposing it by ONOO– decomposition catalysts such as FeTM-4-PyP5+ blocked these pathways, leading to inhibition of antinociceptive tolerance.