Infectious mononucleosis (IM) is an immunopathological disease caused by EBV that occurs in young adults and is a risk factor for Hodgkin lymphoma (HL). An association between EBV-positive HL and genetic markers in the HLA class I locus has been identified, indicating that genetic differences in the HLA class I locus may alter disease phenotypes associated with EBV infection. To further determine whether HLA class I alleles may affect development of EBV-associated diseases, we analyzed 2 microsatellite markers and 2 SNPs located near the HLA class I locus in patients with acute IM and in asymptomatic EBV-seropositive and -seronegative individuals. Alleles of both microsatellite markers were significantly associated with development of IM. Specific alleles of the 2 SNPs were also significantly more frequent in patients with IM than in EBV-seronegative individuals. IM patients possessing the associated microsatellite allele had fewer lymphocytes and increased neutrophils relative to IM patients lacking the allele. These patients also displayed higher EBV titers and milder IM symptoms. The results of this study indicate that HLA class I polymorphisms may predispose patients to development of IM upon primary EBV infection, suggesting that genetic variation in T cell responses can influence the nature of primary EBV infection and the level of viral persistence. 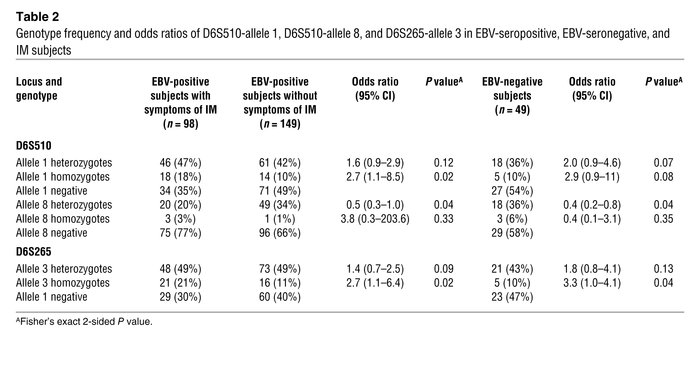