The fact that adenoviral vectors activate innate immunity and induce type I IFNs has not been fully appreciated in the context of cancer gene therapy. Type I IFNs influence different aspects of human immune response and are believed to be crucial for efficient tumor rejection. We performed transcriptional profiling to characterize the response of cutaneous lymphomas to intralesional adenovirus-mediated IFN-γ (Ad-IFN-γ) gene transfer. Gene expression profiles of skin lesions obtained from 19 cutaneous lymphoma patients before and after treatment with Ad-IFN-γ revealed a distinct gene signature consisting of IFN-γ– and numerous IFN-α–inducible genes (type II– and type I–inducible genes, respectively). The type I IFN response appears to have been induced by the vector itself, and its complexity, in terms of immune activation, was potentiated by the IFN-γ gene insert. Intralesional IFN-γ expression together with the induction of a combined type I/II IFN response to Ad-IFN-γ gene transfer seem to underlie the objective (measurable) clinical response of the treated lesions. Biological effects of type I IFNs seem to enhance those set in motion by the transgene, in our case IFN-γ. This combination may prove to be of therapeutic importance in cytokine gene transfer using Ads. 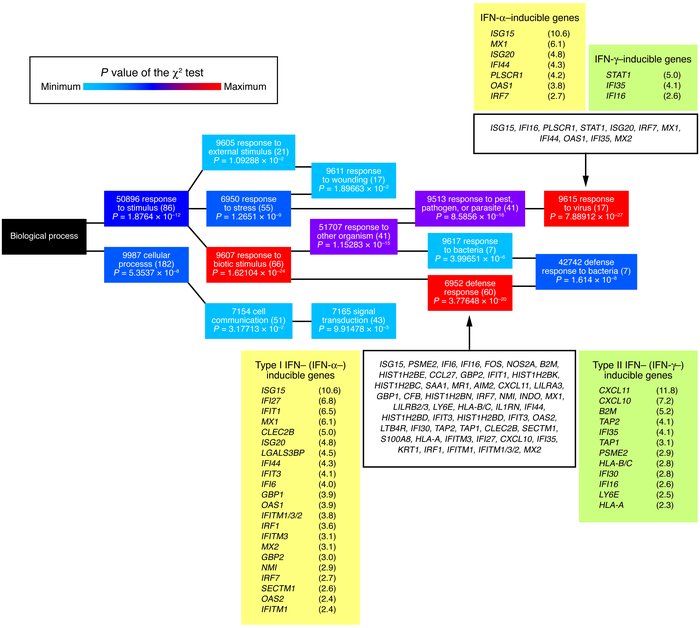 The GO mining tool maps 213 queried genes and groups them hierarchically according to the GO biological processes in which they participate (GO term), represented by colored rectangles (nodes). The node color represents the value of the c2 test used by the GO mining tool to measure the grouping probability of the queried genes (highest values shown in red and lower values in blue). Node text contains the GO term ID, the GO term title, and the number of queried genes belonging to that GO term shown in parentheses; the value of the c2 test for the respective GO term is shown below. Genes of interest are additionally listed in detail. Genes are identified by their gene symbols and fold change in expression (posttreatment 3 versus baseline), shown in parentheses.