Holoprosencephaly (HPE) is a clinically heterogeneous developmental anomaly affecting the CNS and face, in which the embryonic forebrain fails to divide into distinct halves. Numerous genetic loci and environmental factors are implicated in HPE, but mutation in the sonic hedgehog (Shh) gene is an established cause in both humans and mice. As growth arrest–specific 1 (Gas1) encodes a membrane glycoprotein previously identified as a Shh antagonist in the somite, we analyzed the craniofacial phenotype of mice harboring a targeted Gas1 deletion. Gas1–/– mice exhibited microform HPE, including midfacial hypoplasia, premaxillary incisor fusion, and cleft palate, in addition to severe ear defects; however, gross integrity of the forebrain remained intact. These defects were associated with partial loss of Shh signaling in cells at a distance from the source of transcription, suggesting that Gas1 can potentiate hedgehog signaling in the early face. Loss of a single Shh allele in a Gas1–/– background significantly exacerbated the midline craniofacial phenotype, providing genetic evidence that Shh and Gas1 interact. As human GAS1 maps to chromosome 9q21.3–q22, a region previously associated with nonsyndromic cleft palate and congenital deafness, our results establish GAS1 as a potential locus for several human craniofacial malformations.

Shh pathway gene expression in the craniofacial region of WT and mice. 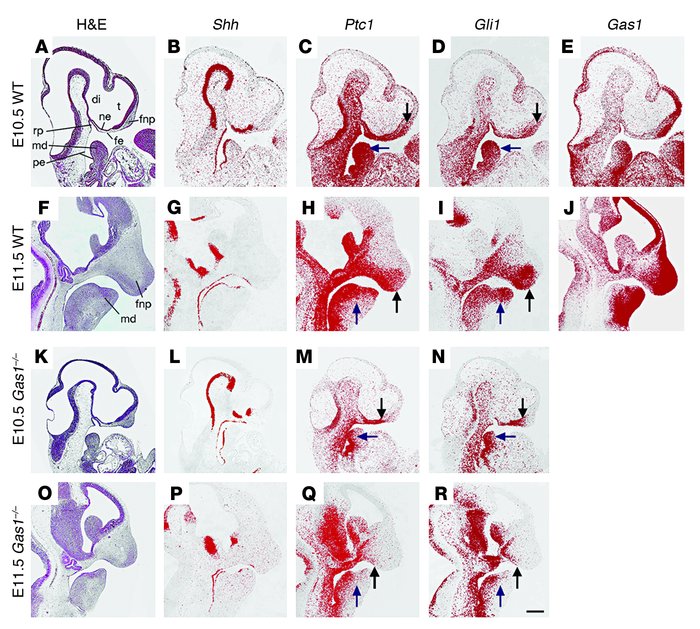 (, , , and ) At E10.5 and E11.5, sagittal sections demarcated in the pharyngeal endoderm, diencephalon, and facial ectoderm of WT embryos. (, , , and ) and demonstrated a gradient of transcriptional activity across these regions in response to signaling. ( and ) In contrast, was expressed at a distance from the source of transcription, in a partially overlapping domain with and , at their peripheral margins. (–) In embryos at both E10.5 and E11.5, there was a marked reduction in the domain of both ( and ) and ( and ) expression within the frontonasal (black arrows) and mandibular processes (blue arrows) compared with that of WT embryos (compare with respective arrows in , , , and ), while expression was normal in compared with WT embryos ( and ) at both stages. di, diencephalon; fe, facial ectoderm; fnp, frontonasal process; md, mandibular process; ne, neural ectoderm; pe, pharyngeal endoderm; rp, Rathke’s pouch; t, telencephalon. Scale bar: 200 μm.