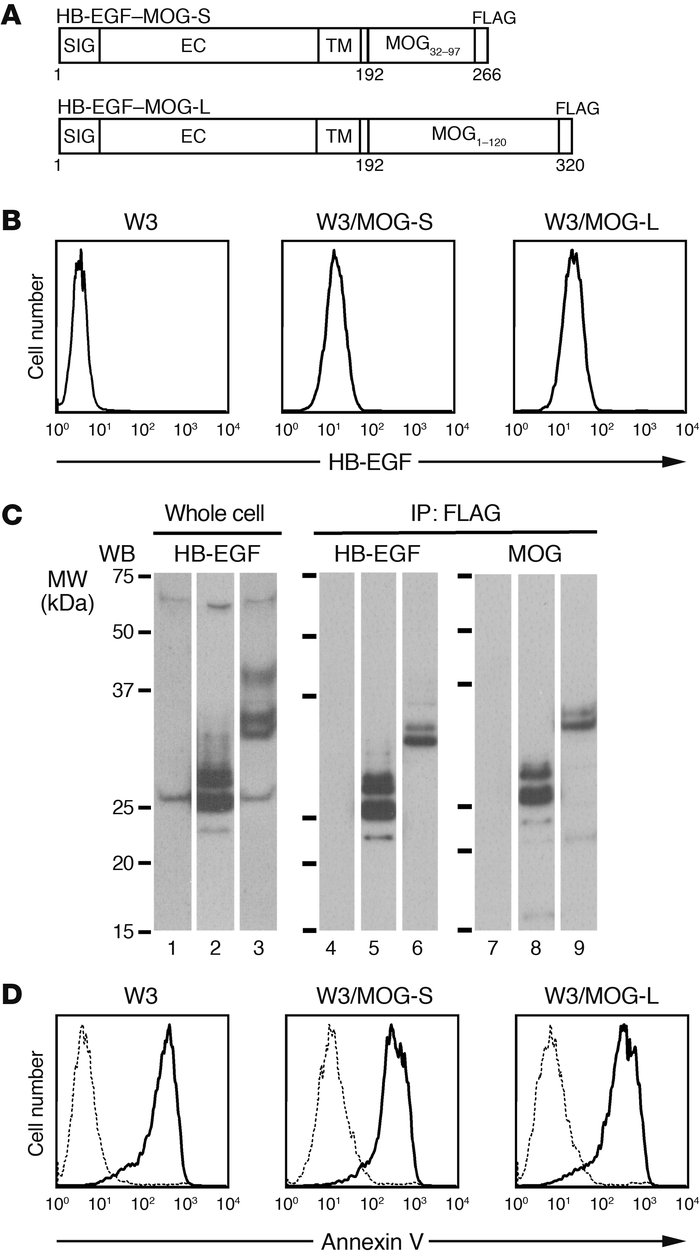 () Schematic diagrams of the HB-EGF–MOG fusion protein constructs. The amino acids 32–97 (HB-EGF–MOG-S) or 1–120 (HB-EGF–MOG-L) of MOG are attached at the C terminus of the signal (SIG), extracellular (EC), and transmembrane (TM) domains of HB-EGF. () Expression of HB-EGF–MOG/FLAG on the cell surface of transformants. W3 cells and their transformants expressing HB-EGF–MOG-S (W3/MOG-S) or HB-EGF–MOG-L (W3/MOG-L) were stained with Alexa Fluor 488–conjugated anti–HB-EGF antibody and analyzed by flow cytometry. () Immunodetection of HB-EGF–MOG proteins in the transformants. W3 cells (lanes 1, 4, and 7) and W3 cells expressing MOG-S (lanes 2, 5, and 8) or MOG-L (lanes 3, 6, and 9) were lysed and analyzed by Western blotting (WB) with anti–HB-EGF antibody (lanes 1–3). In order to confirm the expression of full-length HB-EGF–MOG/FLAG fusion proteins, cell lysates were subjected to immunoprecipitation with an anti-FLAG antibody. Immunoprecipitates were analyzed by Western blotting with anti–HB-EGF (lanes 4–6) or anti-MOG antibodies (lanes 7–9). () Induction of apoptosis in W3 cells and their transformants. W3 cells and their transformants were treated with (solid line) or without (dashed line) recombinant Fas ligand for 4 hours. Cells were then stained with PE-conjugated annexin V and analyzed by flow cytometry. More than 95% of W3 and W3/MOG cells underwent apoptosis by treatment with Fas ligand.