Deleterious effects on the heart from chronic stimulation of β-adrenergic receptors (βARs), members of the 7 transmembrane receptor family, have classically been shown to result from Gs-dependent adenylyl cyclase activation. Here, we identify a new signaling mechanism using both in vitro and in vivo systems whereby β-arrestins mediate β1AR signaling to the EGFR. This β-arrestin–dependent transactivation of the EGFR, which is independent of G protein activation, requires the G protein–coupled receptor kinases 5 and 6. In mice undergoing chronic sympathetic stimulation, this novel signaling pathway is shown to promote activation of cardioprotective pathways that counteract the effects of catecholamine toxicity. These findings suggest that drugs that act as classical antagonists for G protein signaling, but also stimulate signaling via β-arrestin–mediated cytoprotective pathways, would represent a novel class of agents that could be developed for multiple members of the 7 transmembrane receptor family. 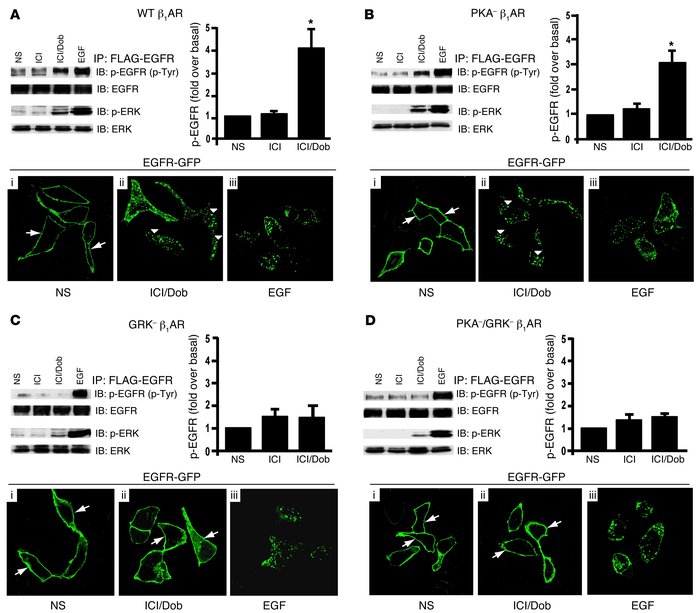 HEK293 cells stably expressing WT β1AR (), PKA– β1AR (), GRK– β1AR (), or PKA– GRK– β1AR () and transfected with FLAG-EGFR were treated with ICI and Dob (as described in Methods) and compared with cells with no stimulation (NS) or EGF stimulation. WT β1AR () and PKA– β1AR () induced increases in phospho-EGFR and phospho-ERK1/2 after 5 minutes in response to treatment with Dob, while GRK– β1AR () and PKA–/GRK– β1AR () lacked this effect; * < 0.05 versus NS. EGFR internalization following Dob or EGF stimulation for 30 minutes was visualized using confocal microscopic analysis of HEK293 cells stably expressing the above β1AR mutants and transfected with EGFR-GFP. In the absence of agonist, EGFR-GFP was visualized on the membrane in each stable cell line (–, i, arrows), while EGF stimulation resulted in redistribution of EGFR-GFP into cellular aggregates (–, iii). Treatment of either WT β1AR or PKA– β1AR cells with Dob resulted in a similar redistribution of EGFR into cellular aggregates ( and , ii, arrowheads), an effect that was absent in GRK– β1AR and PKA–/GRK– β1AR cells, where EGFR-GFP remained on the membrane ( and , ii, arrows). Original magnification, ×100.