Primary hypomagnesemia constitutes a rare heterogeneous group of disorders characterized by renal or intestinal magnesium (Mg2+) wasting resulting in generally shared symptoms of Mg2+ depletion, such as tetany and generalized convulsions, and often including associated disturbances in calcium excretion. However, most of the genes involved in the physiology of Mg2+ handling are unknown. Through the discovery of a mutation in the EGF gene in isolated autosomal recessive renal hypomagnesemia, we have, for what we believe is the first time, identified a magnesiotropic hormone crucial for total body Mg2+ balance. The mutation leads to impaired basolateral sorting of pro-EGF. As a consequence, the renal EGFR is inadequately stimulated, resulting in insufficient activation of the epithelial Mg2+ channel TRPM6 (transient receptor potential cation channel, subfamily M, member 6) and thereby Mg2+ loss. Furthermore, we show that colorectal cancer patients treated with cetuximab, an antagonist of the EGFR, develop hypomagnesemia, emphasizing the significance of EGF in maintaining Mg2+ balance. 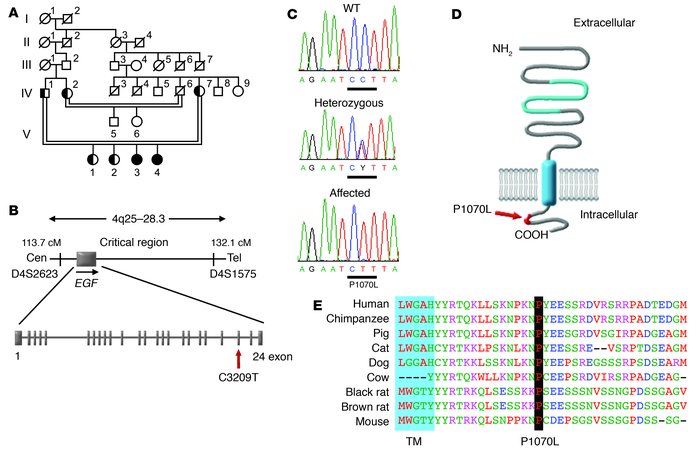 () Pedigree of the family in which specific members suffer from IRH. Filled symbols represent affected individuals, half-filled symbols are heterozygous for the mutation C3209T, and open symbols represent clinically unaffected family members not screened for the mutation. Slash marks indicate deceased individuals, and double lines show consanguinity. () Schematic representation of the critical interval between polymorphic markers D4S2623 and D4S1575 on chromosome 4q and the intron-exon structure of the gene, depicting the identified mutation. The position of the polymorphic markers is indicated by vertical bars. The horizontal arrow below the schematical boxed representation of depicted between the polymorphic markers indicates the localization and orientation of the gene. Cen, centromeric; tel, telomeric. () Genomic mutation sequence analysis of EGF in wild-type, heterozygous, and affected individuals. The mutated nucleotide and resulting amino-acid change is shown under the affected individual’s sequence. The black bar under that sequence indicates the mutated codon. The black bars under the sequences of the WT and heterozygous specify codon 1070 of . The affected individuals both have a homozygous mutation C3209T in exon 22, resulting in the amino acid substitution P1070L. () Schematic model of pro-EGF, which resides as a type I membrane protein at the plasma membrane. The position of the P1070L mutation is depicted. () Sequence homology analysis of juxtamembrane domain and flanking residues. P1070 is strongly conserved among different species and forms the second proline of a basolateral PXXP sorting motif. The indicated colors represent functional conservation of the amino acids: red, small plus hydrophobic; blue, acidic; magenta, basic; green, hydroxyl plus amine plus basic; gray, others. TM, transmembrane domain.