We treated 10 children with X-linked SCID (SCID-X1) using gammaretrovirus-mediated gene transfer. Those with sufficient follow-up were found to have recovered substantial immunity in the absence of any serious adverse events up to 5 years after treatment. To determine the influence of vector integration on lymphoid reconstitution, we compared retroviral integration sites (RISs) from peripheral blood CD3+ T lymphocytes of 5 patients taken between 9 and 30 months after transplantation with transduced CD34+ progenitor cells derived from 1 further patient and 1 healthy donor. Integration occurred preferentially in gene regions on either side of transcription start sites, was clustered, and correlated with the expression level in CD34+ progenitors during transduction. In contrast to those in CD34+ cells, RISs recovered from engrafted CD3+ T cells were significantly overrepresented within or near genes encoding proteins with kinase or transferase activity or involved in phosphorus metabolism. Although gross patterns of gene expression were unchanged in transduced cells, the divergence of RIS target frequency between transduced progenitor cells and post-thymic T lymphocytes indicates that vector integration influences cell survival, engraftment, or proliferation. 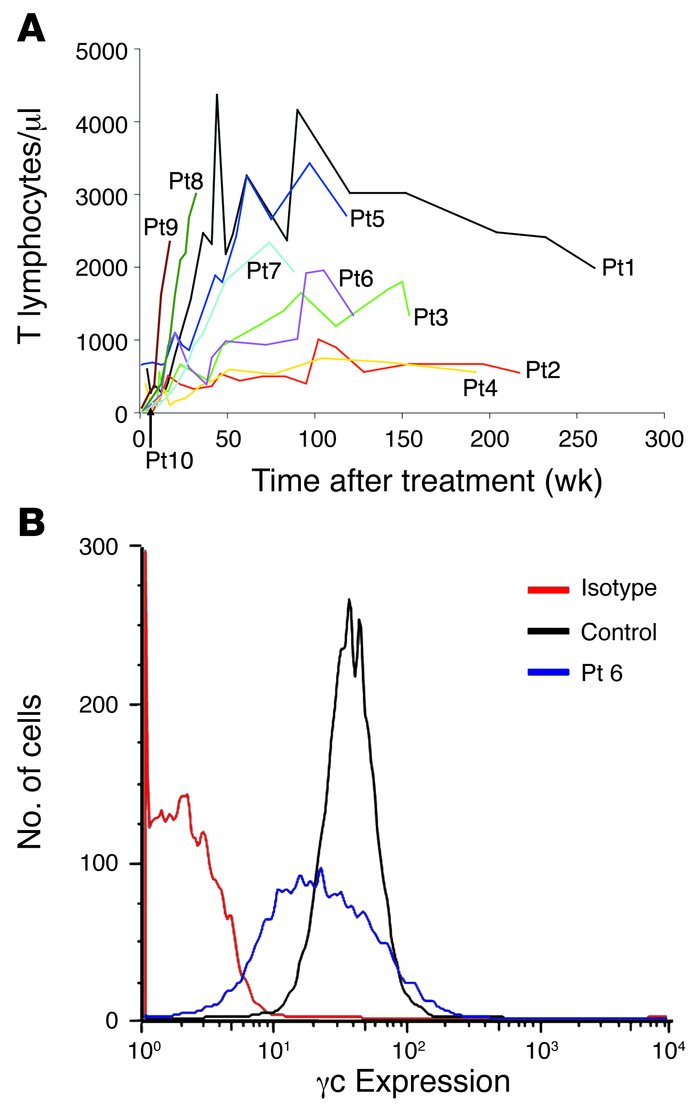 () Lymphocyte recovery in patients after treatment in the clinical trial. CD3+ counts were obtained for each patient at regular time points after treatment. All patients demonstrated an increase in lymphocyte count, albeit varied, that was stable over time. () Surface expression of γc protein. Expression of γc on CD3+ T cells was determined 25 months after treatment for Pt6, who had no cell-surface γc protein before gene therapy. The isotype is a negative control, which shows levels of background fluorescence. The control, a healthy donor, demonstrates normal levels of γc expression on the cell surface.