Skeletal development and turnover occur in close spatial and temporal association with angiogenesis. Osteoblasts are ideally situated in bone to sense oxygen tension and respond to hypoxia by activating the hypoxia-inducible factor α (HIFα) pathway. Here we provide evidence that HIFα promotes angiogenesis and osteogenesis by elevating VEGF levels in osteoblasts. Mice overexpressing HIFα in osteoblasts through selective deletion of the von Hippel–Lindau gene (Vhl) expressed high levels of Vegf and developed extremely dense, heavily vascularized long bones. By contrast, mice lacking Hif1a in osteoblasts had the reverse skeletal phenotype of that of the Vhl mutants: long bones were significantly thinner and less vascularized than those of controls. Loss of Vhl in osteoblasts increased endothelial sprouting from the embryonic metatarsals in vitro but had little effect on osteoblast function in the absence of blood vessels. Mice lacking both Vhl and Hif1a had a bone phenotype intermediate between those of the single mutants, suggesting overlapping functions of HIFs in bone. These studies suggest that activation of the HIFα pathway in developing bone increases bone modeling events through cell-nonautonomous mechanisms to coordinate the timing, direction, and degree of new blood vessel formation in bone.

Loss of in osteoblasts does not alter calvarial bone. 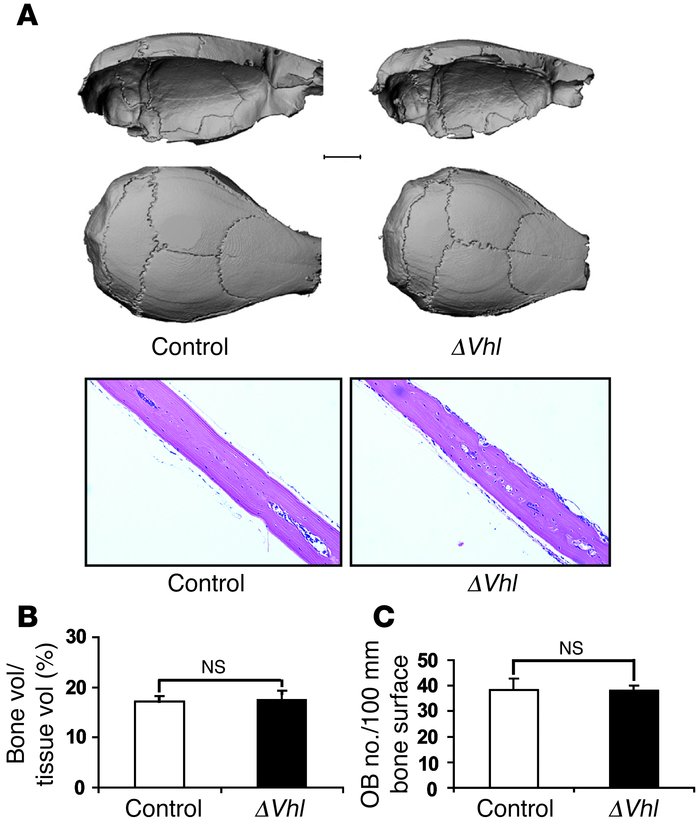