Integrin adhesion molecules mediate lymphocyte migration and homing to normal and inflamed tissues. While the ligand-binding activity of integrins is known to be modulated by conformational changes, little is known about how the appropriate balance of integrin adhesiveness is maintained in order to optimize the migratory capacity of lymphocytes in vivo. In this study we examined the regulation of the gut homing receptor α4β7 integrin by manipulating at the germline level an integrin regulatory domain known as adjacent to metal ion-dependent adhesion site (ADMIDAS). ADMIDAS normally serves to raise the activation threshold of α4β7, thereby stabilizing it in the default nonadhesive state. Lymphocytes from knockin β7 (D146A) mice, which harbor a disrupted ADMIDAS, not only expressed an α4β7 integrin that persistently adhered to mucosal addressin cell adhesion molecule–1 (MAdCAM-1), but also exhibited perturbed cell migration along MAdCAM-1 substrates resulting from improper de-adhesion of the lymphocyte trailing edge. In vivo, aberrantly activated α4β7 enhanced adhesion to Peyer’s patch venules, but suppressed lymphocyte homing to the gut, diminishing the capacity of T cells to induce colitis. Our results underscore the importance of a proper balance in the adhesion and de-adhesion of the α4β7 integrin, both for lymphocyte trafficking to the gut and for colitis progression. 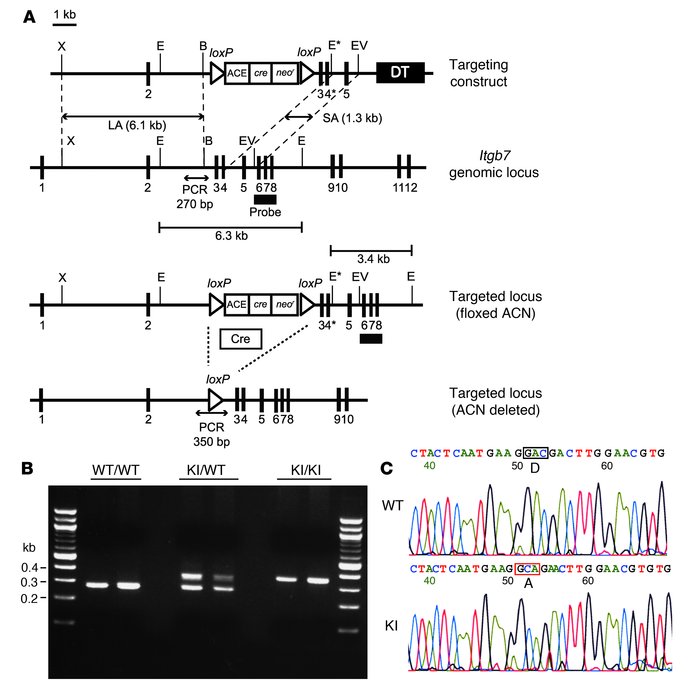